Kathmandu Gets A Glimpse Of Mount Everest From 200 Km Away. Pics Are Viral

The photos were taken from Chobar - a village in Kathmandu district. 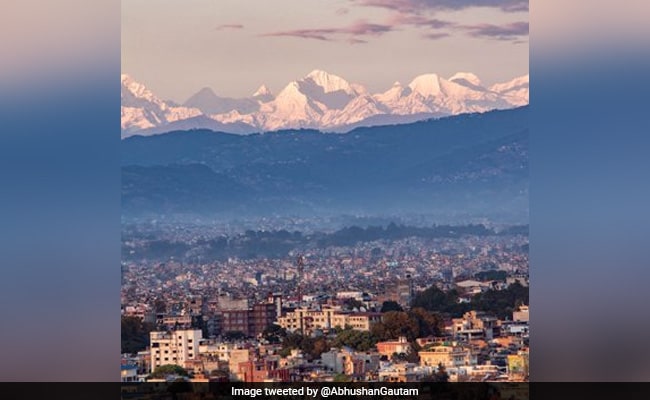 A viral photo claims to show the Mt Everest from Kathmandu Valley.

In yet another instance of lower air pollution levels leading to some stunning views of the Himalayas, resident of Kathmandu Valley in Nepal woke up to a glimpse of the Mount Everest last week. The world's highest peak - which is located around 200 kilometers away from Kathmandu - became visible in the region after the coronavirus lockdown imposed in the country cleaned the air, reports Nepali Times.

Breathtaking photos of the Mount Everest, as visible from Kathmandu, were clicked by Twitter user Abhushan Gautam and are now being widely shared online.

@kundadixit Can you please help me confirm if the mountain hidden behind is Mt. Everest? Photo taken on Sunday evening. pic.twitter.com/PueTyFmxTd

According to Nepali Times, the photos were taken from Chobar - a village in Kathmandu district - on the remarkably clear evening of May 10. The snow-capped peak is visible behind Mt Kang Nachugo and Mt Chobutse.

The #COVID19Lockdown has cleaned the air over #Nepal and northern #India. So much so that for the first time in many years, Mt #Everest can be seen again from #Kathmandu Valley even though it is 200km away.

The images have collected thousands of 'likes' and 'shares' on the microblogging platform. While many complimented the photographs, others raised doubts on their authenticity. Mr Gautam later took to Twitter to explain how the peak was visible from a village located 200 kms away.

According to Fox News, this is the first time in decades that Mt Everest has been visible from Kathmandu. Photos of the peak have collected amazed reactions on social media:

Beauty at its Peak ♥️♥️ https://t.co/A1rh9dNzyM

Recently, residents of a village in Bihar also woke up to see the Himalayas from hundreds of kilometers away. After that, Saharanpur in Uttar Pradesh also got a glimpse of the magnificent view as severe thunderstorms and rain cleared the air.