Is That A 50-Foot Anaconda? Here's The Truth Behind Viral Snake Video

In the clip, a supersized snake can be seen slithering from one end of a 'river' to the other. 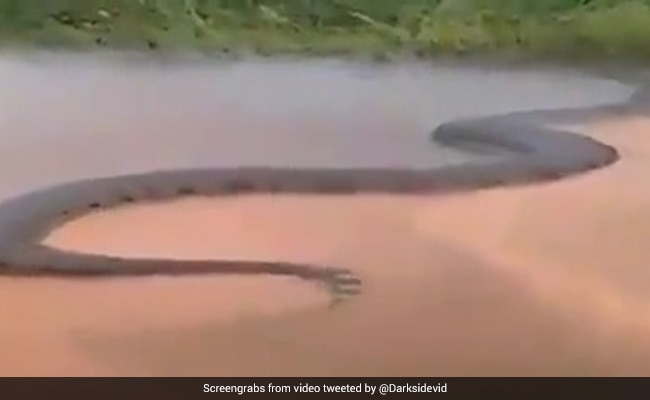 Is that actually a 50-foot anaconda? Read on to find out.

A video going viral on Twitter claims to show a 50-foot anaconda crossing a river in Brazil - but is it real? The video in question is not a new one - it has cropped up on social media time and again since it first surfaced online in 2018. According to several versions of the video, it was filmed in the Xingu River in Brazil.

It was reposted by a popular Twitter account this morning along with the caption, "An anaconda measuring more than 50 feet found in the Xingu River, Brazil."

An anaconda measuring more than 50 feet found in the Xingu River, Brazil pic.twitter.com/FGDvyO76sn

The video has garnered more than 7 lakh views on the microblogging platform.

In the clip, a supersized snake can be seen slithering from one end of a 'river' to the other. However, claims that the anaconda measures an incredible 50-feet are not actually true.

According to fact-checking website That's Nonsense, one of the earliest instances of the video appearing on the Internet is from April 2018. It was uploaded on YouTube with the title "Giant anaconda crossing the road" and without naming the location.

If you compare this video with the earlier one, it is clear that the video which claims that the size of the anaconda is 50 feet has actually been stretched. Changing the dimensions of the video makes the snake look bigger than it actually is.

News website Khou also confirms that the original clip is actually from 2018 and shows the snake crossing a road, not a river.

Therefore, claims that this video shows a 50-foot anaconda crossing a river are false.