"I was locked up in Egypt because I climbed the Pyramids Of Giza," wrote Vitaly Zdorovetskiy. 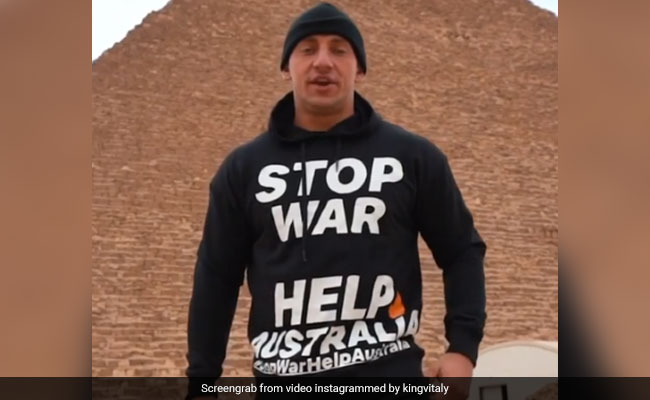 Vitaly Zdorovetskiy was jailed for climbing a pyramid in Egypt.

Instagram influencer Vitaly Zdorovetskiy has posted a video that shows him climbing a pyramid in Egypt - a stunt that earned him five days in jail. On Wednesday, the American-Russian influencer shared a photo that appears to show him sitting on top of one of the pyramids. "I was locked up in Egypt because I climbed the Pyramids Of Giza," he wrote.

In his post, he added that he had been jailed "many times but this one was by far the very worst." He also told his 3.1 million Instagram followers that he did it "for a good cause"

According to Ahram Online, Egyptian Parliament made it illegal to climb the pyramids in November. It ruled that anyone "found in an archaeological site or museum or climbing any antiquity without obtaining a license" would face imprisonment of up to a month and/or a fine.

Vitaly Zdorovetskiy, who is also a popular YouTuber with a following of over 10 million, then posted a video that shows him climbing the pyramid. He was seen wearing a sweatshirt with the words "Stop War" and "Help Australia" emblazoned on it.

"I did this for a good cause and it put me 5 nights in Egyptian jail," wrote the 27-year-old. "Let's unite and donate for Australia. I hope the world will hear me!"

In the video, he also asks his followers to "stop war" and "help Australia... keep donating."

The video, shared just six hours ago, has already been viewed more than 5 lakh times on Instagram. Many in the comments section criticised the stunt.

"Why don't you donate your money! Instead of climbing around on a ancient historical for no reason!" wrote one person.

"Dude disrespecting Egypt and using a huge tragedy to get clout," said another.

"What war is he talking about? There is literally no war," a third added.

According to The Sun, this is not the first time that Vitaly Zdorovetskiy has found himself in trouble with the law. In 2016, he was apprehended for trespassing after climbing the Hollywood Sign.

He has also been arrested for running onto the field during the 2016 NBA and 2017 MBL finals.

Watch What Happened When Kate Middleton Was Handed A Snake