The video shows a whirlwind of water rising from the sea and billowing up a cliff. 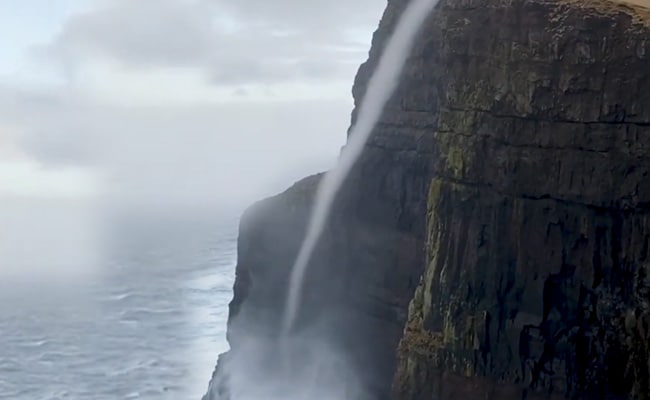 An incredble video shows water flowing up a cliff.

An incredible video, captured in Faroe Islands, shows a column of water flowing upwards to defy gravity. Samy Jacobsen, 41, was walking along the cliffs off Suouroy in the Faroe Islands when he came across the extraordinary sight, reports Yahoo News.

The video, captured on Monday, shows a whirlwind of water rising from the sea and billowing up to the top of a cliff.

Weather experts believe the vortex was a water spout - a spiralling pillar of air - which forms like a tornado over the water when a cliff edge spins the wind in a circle. Most water spouts, however, do not suck up water and are just weak, rotating columns of air.

According to Daily Star, Greg Dewhurst, senior operational meteorologist at the Met Office, described the phenomenon as "spectacular".

"To us here in the operations centre it looks like a water spout which is a little like a tornado but it forms over the water," he said. "The weather over the area is unsettled with heavy showers and these ingredients together help form the water spouts.

"Water spouts are not too uncommon during unsettled weather but make spectacular videos and photos."