How These Women Used A JCB Excavator Is Prime Indian Jugaad. Watch

"It happens only in India," wrote one person in the comments section. 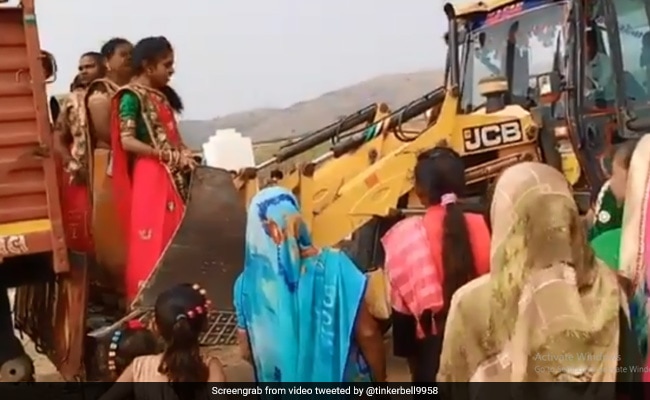 A viral video shows a group of women using a JCB machine in an unusual way.

They say that nobody can beat Indians at jugaad - and this video proves it. Jugaad is a word that can roughly be translated to "a clever hack". Used to signify creativity in making the best out of the resources available, jugaad is often celebrated as an example of the Indian spirit of resourcefulness.

After a khatiya excavator and a bucket shower, another example of Indian jugaad is currently amusing people on social media. The video, which is being widely shared on Twitter and Facebook, shows a group of women using a JCB excavator to climb down from the back of a truck. In the video, they climb onto the bucket before being gently lowered to the ground by the JCB operator.

"Use of JCB which the Japanese & American still not aware of," wrote Twitter user '@tinkerbell9958' while sharing the video on the microblogging platform.

The video has been viewed nearly 21,000 times on Twitter since it was shared online four days ago. Another version, shared on Facebook, has garnered over 6 lakh views. The short clip has also amused many. Take a look at some of the reactions it has collected:

It happens only in INDIA

Ha Ha.. Need is the mother of invention 👏👏

This is not the first time a JCB excavator has been used for strange purposes. In 2018, a couple from Karnataka went for a spin on a JCB digger after their wedding. After that, in May last year, hilarious #JCBKiKhudayi memes took over Twitter in a bizarre but hilarious trend.