"Words can't describe how grateful I am to the both of them", says Linda Munkley for her two dogs.

A woman from Wales says she owes her life to her pets after they detected her cancer. Linda Munkley, 65, started checking for breast lumps after noticing her two German shepherds behaving strangely, reports The Mirror.

"I have four German shepherds including five-year-old Bea and her three-year-old daughter Enya," said the Bargoed resident to Wales Online.

"One day I was sat on the sofa when Bea jumped up and began intensely sniffing and headbutting my chest area. She had never done anything like this before so it was quite unusual but at the time I thought nothing of it."

However, Linda says, the "headbutting" continued for months.

"She kept constantly doing it every day, jumping up at me and really sniffing just my chest area - she was so determined and I couldn't stop her from doing it at all," she explained to Wales Online.

After two months of this strange behaviour from her dog, Linda, who had been checking for lumps, felt one in one of her breasts. "I went to the doctors to have it examined and so they analysed it and carried out a mammogram and then confirmed to me that it was a fast-growing form of breast cancer and it had started spreading to my lymph nodes," she said.

After the diagnosis, Enya, too, began to behave like her mother Bea - nuzzling her owner's chest and jumping onto her lap constantly. 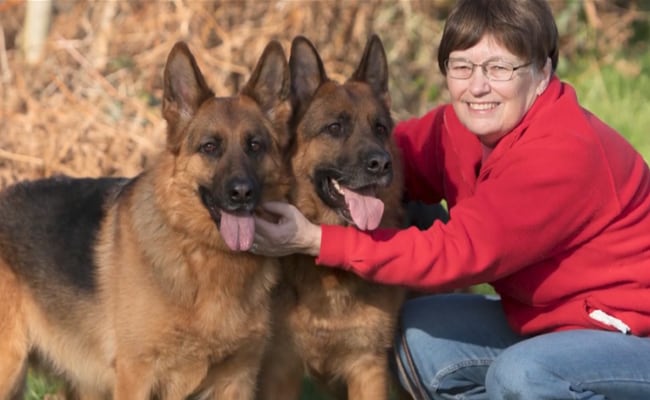 Linda Munkley with her dogs, Bea and Enya.

Linda has now undergone successful treatment to get rid of her cancer. She says that her dogs stopped their behaviour after her third chemotherapy session.

She also added that her doctor was "amazed" when she told him about her German shepherds, and suggested that she thank them for saving her life.

"My doctor was amazed and told me that I should go home and thank my dogs because they had saved my life," she said, according to The Mirror.

"As their behaviour had made me keep checking for lumps my cancer was caught in its very first stages which means we were able to successfully tackle it - my doctor even said it was one of the best cases they had ever seen and treated."

"Words can't describe how grateful I am to the both of them", Linda says for her two dogs.