A Cow Walks Through IIT Bombay Classroom. No, Really. Watch. 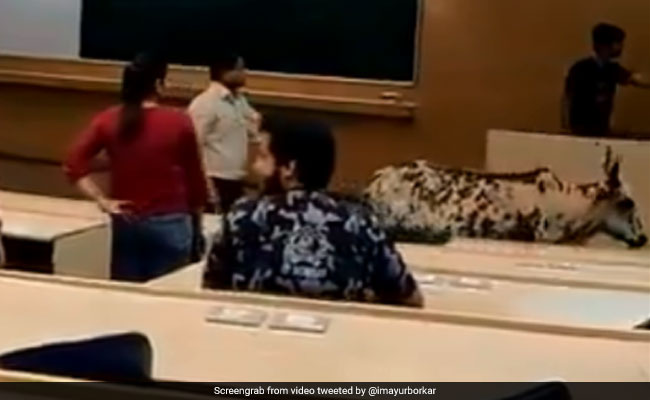 A video of a cow in an IIT Bombay classroom has gone viral online.

Barely a few weeks after an intern of the Indian Institute of Technology (IIT) Bombay was attacked by stray bulls on campus, a video of a cow interrupting a class in the prestigious institute has gone viral. The video shows the cow sauntering into a classroom as amused students look on. It then strolls around the room as students try to shoo it away.

The incident reportedly occurred on Saturday. Authorities of IIT Bombay said that it was not clear from the video when and where the incident took place, adding that they were looking into the matter, reports news agency IANS.

Students claim that it was raining heavily when the incident happened, and the cow may have entered the building for shelter, straying into the lecture hall, IANS reports.

On Twitter, the clip has inspired a sea of hilarious reactions.

How did that ???? cow enter IIT BOMBAY without clearing JEE Advanced??#CowInIITBombay#IITBombaypic.twitter.com/D5xQEKGZ1W

But did you notice that guy who is still studying.
I want that focus in my life.#IITBombaypic.twitter.com/47Nb3UR5ym

A leopard had taken refuge in IIT Bombay recently after heavy rain.

What do you think of the video? Let us know using the comments section