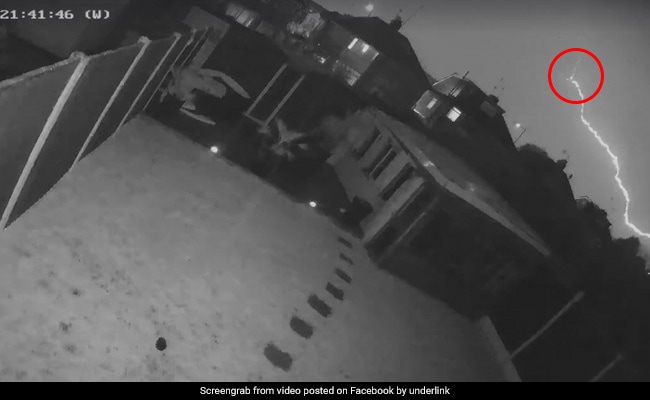 The horrifying moment a bolt of lightning struck a packed passenger airplane was caught on camera in UK. An Aer Lingus flight going to Dublin from Birmingham was struck by lightning during a storm on Sunday night, reports The Sun.

The jet had just taken off for Ireland when it was struck by lightning in the midst of storm Ciara. Footage captured by Birmingham resident Daniel Pereira's security camera shows rain lashing the lens as lightning strikes the plane.

Locals reportedly heard a loud bang before the bolt hit the plane mid-air. Miraculously, the aircraft continued on its journey, seemingly unharmed by the lightning.

Footage of the incident, shared by Mr Pereira on Facebook Sunday, has been viewed more than 88,000 times.

"We were watching TV when we saw a huge light on the other side of our closed blinds and then a heard a huge noise which made our dogs jump," Mr Pereira, 31, told Birmingham Live.

"We couldn't believe what is had been, we see planes going over our house all the time, never seen anything like that before."

A spokeswoman from Aer Lingus said: "Aer Lingus can confirm that on its departure from Birmingham Airport at 21:33, flight EI 277 to Dublin encountered lightning.

"The aircraft, which is designed to withstand regular weather occurrences, was not damaged and operated as normal to Dublin where it landed at 22:38."