The bike-riding cat has amused many. 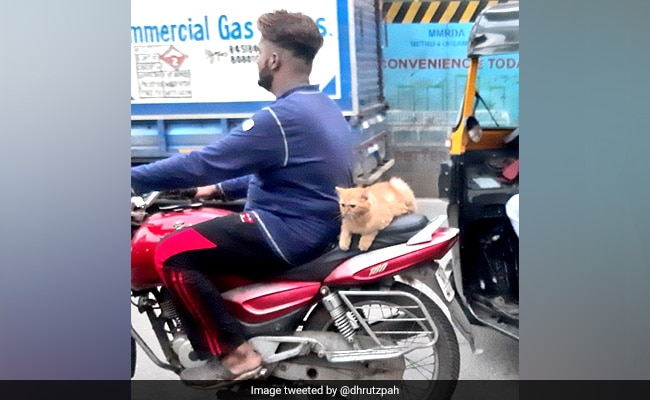 A cat was spotted riding pillion on a bike.

A cat, spotted riding pillion on a bike, has delighted social media users. Pics of the bike-riding cat have become a hit on Twitter, where they were shared on Wednesday. The pictures were posted by a Twitter user who goes by the name Weeb on the microblogging website, and have collected a number of 'likes' and amused comments. They show the cat holding onto the seat of a two-wheeler, apparently cool as a cucumber, while a man drives it.

It is not clear where the pics were clicked. However, a Mumbai Metropolitan Region Development Authority logo in the background, along with a partially-visible license plate, suggest that the bike-riding feline was spotted in Mumbai.

Take a look at the viral photos below:

This is so dope man I wish I could trust my cat as much. pic.twitter.com/gufOKl2whj

Since being shared online, pics of the cat have collected over 2,500 'likes' and a ton of comments.

plot twist: it's not his cat and he doesn't know it's there

I wish my cat could trust me this much 🥺

Some Twitter users also asked why the man and the cat photographed were not wearing helmets, while others commented on his resemblance to Rishabh Pant.

Is it just me or that guy looks like @RishabhPant17 ?

Should have tagged Mumbai police and Peta for "No helmet", endangering the safety of an animal...but

A few weeks ago, a picture of a dog riding pillion on a bike in Delhi, wearing a helmet on his head, had gone viral online. Before that, it was videos of Sultan - the Mumbai dog famous for riding on top of auto rickshaws - that had delighted social media users.