On the receipt, an employee had typed: "Fam w the terrifying kid". 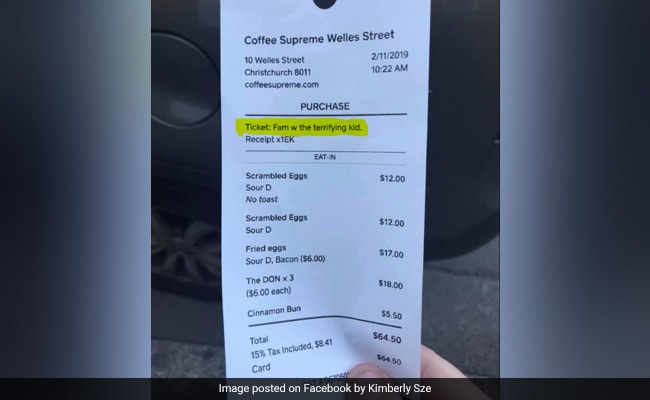 A cafe in New Zealand has come under fire for writing "terrifying kid" on their receipt.

A woman in New Zealand says she was left insulted after a cafe wrote "terrifying" on the receipt to describe her 2-year-old daughter. The cafe has since apologised for the incident. Kimberley Sze suspected she had been overcharged at Coffee Supreme in Christchurch and asked the cafe for a receipt, reports Stuff New Zealand. What she saw instead left her feeling furious.

On the receipt, an employee had typed: "Fam w the terrifying kid".

Ms Sze took to Facebook on Friday to slam the note as "disrespectful" and call out the staff for overcharging them for the meal.

"Writing 'family with the terrifying kid' on our ticket AND intentionally overcharging us... nice one," she wrote. She also added that her daughter had been "nothing but polite and friendly" at the cafe.

"She's never been a terror, never had a meltdown, never caused any problems and the same people working today always comment on how cute and sweet she is."

She concluded her post by saying that her family left without getting their food and that the eatery had lost some regular customers.

Following the incident, Coffee Supreme apologised to Ms Sze and offered her a full refund for the meal. Coffee Supreme's food and beverage manager Tim Norriss also met her and apologised in person, while the employee who made the note had been put on leave.

Ms Sze says she is happy with the cafe's swift response and handling of the situation. "I can see the culture that they have as a company, the shared values of hospitality and inclusivity and creating a positive culture and this one thing that's happened is not a representation of their company," she said to Stuff New Zealand.

By way of apology, Coffee Supreme also put up a post on Facebook. "We are incredibly sorry and wish to apologise publicly," they wrote, adding that the cafe would hand out free coffees and chocolate drinks to young children and their parents till the weekend.