The green puppy has been named Hulk. 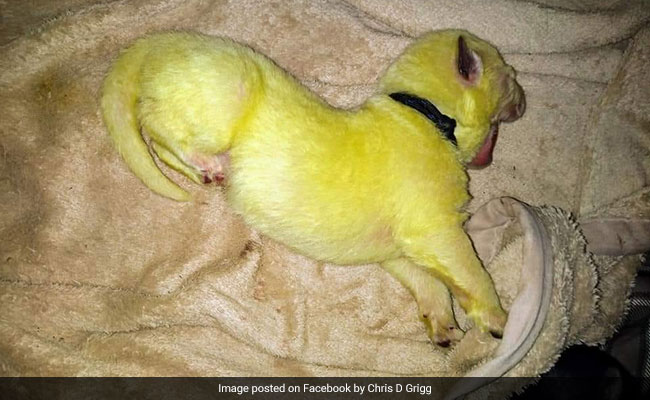 A bright green puppy was born in North Carolina.

"I started freaking out," Shana Stamey said. "But everybody was healthy."

Gypsy gave birth to a litter of eight puppies, and Hulk has captured the Internet's attention. Despite his neon green hue, the puppy is perfectly healthy and there's an explanation for his green colour.

A picture of the lime green puppy was posted on Facebook two days ago by Chris Grigg with the caption: "Our German Shepherd graced us with a 'Green' pup, 'Hulk' is 5 days old!"

Story tonight about a German Shepherd puppy born green just days ago in Canton. Animal experts say it happens from time to time, staining from birth fluids and not harmful, fades away. This pup's human family named him "Hulk. " More at 6. @WLOS_13#LiveOnWLOSpic.twitter.com/7ex4i2wbOI

A lime green puppy was born in North Carolina and its owners named him Hulk. This is the only content that matters today. pic.twitter.com/K42HKev6vx

Ever seen a green puppy? A German shepherd gave birth to 8 puppies in North Carolina and one of them came out lime green! His name is #Hulk and while he looks so different, he is healthy and should go back to his normal blonde color in about 3 weeks. pic.twitter.com/jNBvAN6lkg

Hulk's green fur will gradually fade to white. According to WLOS, Shana Stamey and her family plan on getting Hulk adopted when he is old enough. They consider themselves lucky to have Hulk.

What do you think of Hulk the green puppy? Let us know using the comments section.

Sonam Kapoor On Why Her Baraat Did Not Have Horses