"I am not going in Bigg Boss!" wrote YouTuber CarryMinati aka Ajey Nagar. 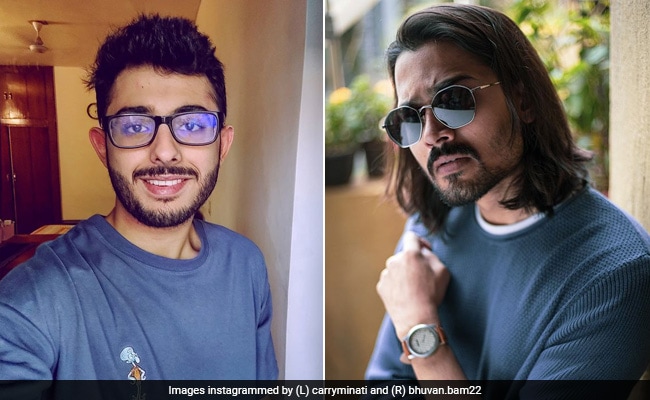 CarryMinati and Bhuvan Bam's Twitter exchange has left many amused.

Social media star CarryMinati has refuted reports suggesting that he would take part in the 14th season of popular reality show Bigg Boss. CarryMinati aka Ajey Nagar took to Twitter this afternoon to clarify that he would not be stepping into the house of Bigg Boss - and it was fellow YouTuber Bhuvan Bam's response to his tweet that had thousands in splits.

Earlier this week, several reports surfaced online suggesting that CarryMinati - one of the most popular YouTubers in India with over 25.5 million subscribers - would be taking part in Bigg Boss 14. The Salman Khan-hosted reality show will premiere on Colors TV starting from October 3rd. While the official list of contestants is yet to be announced, CarryMinati has already clarified that he won't be one of them.

"I am not going in Bigg Boss!" he wrote on Twitter this afternoon. "Don't believe in everything you read," he added, urging his fans to discount reports suggesting that he would participate in the reality show.

While the clarification disappointed some of his fans, Bhuvan Bam - the man behind the hugely popular 'BB Ki Vines' YouTube channel - had a hilarious response. "Tu next year bhi jaayega. Jaise main pichle 4 saal se jaa raha hoon..(You will go next year too, like I have been going for the last four years)," he wrote, referring to his own experience of being placed on the list of rumoured Bigg Boss contestants.

The tweet has garnered over 41,000 'likes' and a ton of amused responses, including one from CarryMinati. The YouTuber responded by sharing two laughing-face emojis.

The upcoming season of Bigg Boss will reportedly have a lockdown theme. Television actors like Nia Sharma, Vivian Dsena and Sugandha Mishra have been named as probable contestants on the show.

The Farmer Who Sold His Cow So His Daughter Could Study