"I'll reach out to him to see if I can invest in upgradations for his workshop," wrote Anand Mahindra. 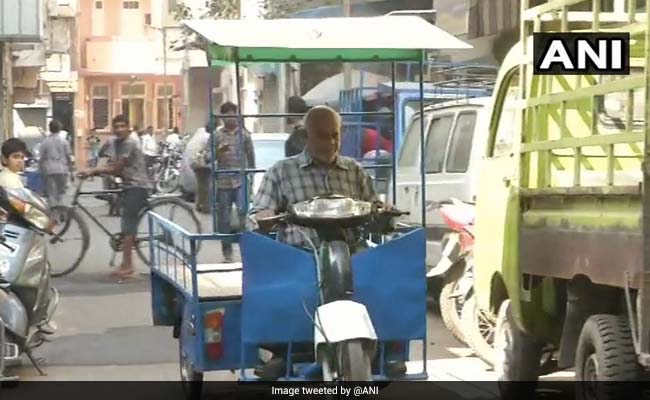 Anand Mahindra has offered to help Vishnu Patel after coming across his story.

In a 2019 interview to ANI, Mr Patel said that he had built seven battery-operated bikes - all out of waste materials - that would not harm the environment. "People throw away waste but I'm making bikes out of it. I want to make 3-wheelers for divyangs that can also carry their families simultaneously," he said.

On Saturday, a Twitter user shared Vishnu Patel's story with Anand Mahindra, who is known for tweeting innovations that catch his eye and has, in the past, extended offers of help to many who have impressed him.

"He's divyang ever since he was 1yr, can't hear but his skills are powerful," the Twitter user described Mr Patel in his tweet, sharing a video of the entrepreneur. "He knows tricks that can make things work alternatively. He's impressing all of us since I was 1yr."

Responding to the tweet, Mr Mahindra called it a "fabulous story" and said that he would reach out to Mr Patel and invest in his workshop. "I'll reach out to him to see if I can invest in upgradations for his workshop," wrote the Chairman of the Mahindra Group.

He added that Mr Patel's story has inspired him to set aside Rs 1 crore as an "initial fund to invest in micro entrepreneurs like him".

Fabulous story. I'll reach out to him to see if I can invest in upgradations for his workshop. In fact he's inspired me to personally set aside ₹1 cr as an initial fund to invest in micro entrepreneurs like him in the country. So much talent & innovation waiting for recognition https://t.co/hM46jv264o

Mr Mahindra's announcement of setting up a fund for micro entrepreneurs and his offer to invest in Mr Patel earned him a lot of praise and goodwill on social media.

You are great Sir that you spare your valuable time for such small entrepreneur.

I just love such skilled hardworking persons... and kudos to philanthropists like Anand Sir who takes personal interest in helping out the deserving 😊🙏

Anand Mahindra frequently extends offers of help and investment to startups and innovators. In 2018, he offered to make a small investment in a well-advertised cobbler's shop. After that, he has offered to buy a car for a man who took his mother on a pilgrimage on his scooter and invest in the business of an 80-year-old selling idlis, among other things.

Hrithik Roshan Wants To Know Who This TikTok Dancer Is