The retired teacher, Lauren Bruzzone, can be seen doing burpees over a bar, flipping tyres and deadlifting 70kg in the video. 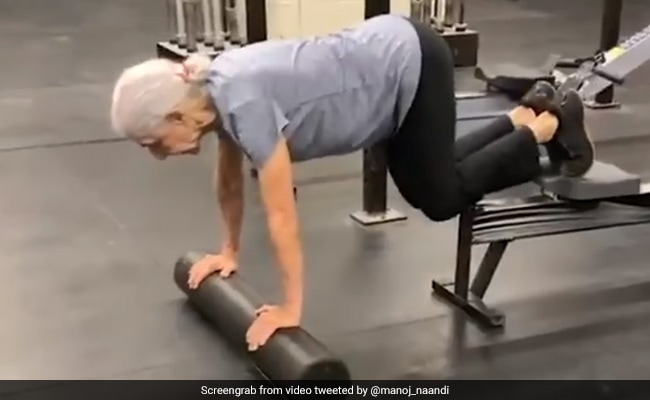 A video of a 72-year-old woman, Lauren Bruzzone, working out in a gym surfaced on social media websites recently and was shared widely on Twitter, as users were left in awe of her fitness. The retired teacher can be seen doing burpees over a bar, flipping tyres and deadlifting 70kg in the video.

The video was also shared by industrialist Anand Mahindra, who said he felt "lazy and flabby compared to this iron woman."

Why did you have to share this video in the morning, Manoj!? It's made me feel lazy and flabby compared to this iron woman... Ah well maybe this is the kick in the rear we all needed to stop making excuses about our exercise routines...☹️ https://t.co/9aQkWJp4lj

Mr Mahindra retweeted the video shared by a user who wrote: "This is an inspiring video. Must watch, this lady will make it difficult for me to skip any of my exercise or yoga sessions hereafter. She has proved again that age is just a number..."

The post collected over 700 retweets, and more than 4.5K likes.

According to People.com, Ms Bruzzone first started CrossFit in her late 60s and joined Carozza Fitness - a private training and CrossFit gym in Stamford, Connecticut.

She said she "doesn't feel her age," and credited her fitness to many years of Yoga.

According to the video, Ms Bruzzon has trained every day for the past 10 years. "You certainly shouldn't let age or anything hold you back," she said.

Since her video went viral, there has been an outpouring of encouraging messages from people all over the world who are inspired by her hard-work. "Life goals! 30 years down, i'd want and hope to be her. So getting started now on the gym and yoga. Thanks for the inspiring post," one user wrote on Twitter.