The tweet has instantly gone viral with more than 2,700 likes within a few hours of being shared. 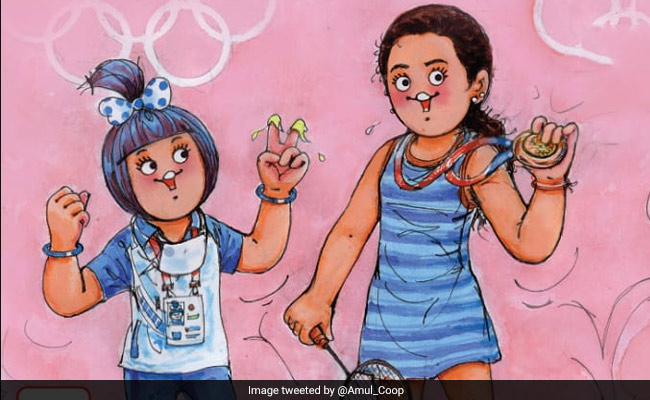 After PV Sindhu won her second individual Olympic medal in Tokyo, Amul posted a congratulatory message for the ace Indian shuttler in typical Amul style. In a tweet, Amul shared an image of PV Sindhu with her bronze medal next to one of India's most loved ad icons - the Amul girl. The campaign played on Sindhu's name and described her as “PV Windhu” after her triumph at the Summer Games. PV Sindhu, 26, created history when she defeated China's He Bing Jiao to become the first Indian woman to win two individual Olympic medals.

The post has instantly gone viral with more than 2,700 likes within a few hours of being shared, and many people joined the food product organization in congratulating the badminton player.

“Congratulations to PV Sindhu and the entire team. Great Game,” a user wrote.

Another person said Ms Sindhu's win was great and historic, adding another spectacular performance is awaited by the Indian Women's hockey team.

Great Historic Win !!
Another Historic win by Women's Hockey team will be seen in coming days !!

India's women players have made a mark for themselves at the Tokyo Olympics, beginning with Mirabai Chanu, who opened India's account by winning the silver medal in weightlifting. Then, boxer Lovlina Borgohain, who has entered the semi-final. She is assured of at least a bronze medal. And now, the Indian women hockey team have displayed incredible perseverance to enter the semi-final for the first time. The women hockey team beat three-time champions Australia 1-0 on Monday.

What a stunning victory by Indian Women's Hockey Team over Australia. #Hockey#hockeyindiapic.twitter.com/s4nddAy3uO

On Amul's tweet, a user commented that the company should make a campaign ad for the women hockey team as they meet Argentina in the semi-finals on Wednesday.

Do make one for Indian Women Hockey team. They Won hearts

Amul has been regularly praising Indian players for their successes at the Olympics and wishing them luck during the Games.

As our real #DilChillers fight it out at the Tokyo Olympics 2020, #DilChillerBhai takes a moment to wish them in his own #Kool way! pic.twitter.com/ofJFZuYKLY

Ms Sindhu was born on July 5, 1995, to PV Ramana and P Vijaya – both elite volleyball players. Her father received the Arjuna Award in 2000. For more than 12 years, Ms Sindhu trained at Pullela Gopichand's academy. The national badminton coach congratulated Ms Sindhu on her victory, saying it was because of her hard work.