No Trees To Be Cut In Mumbai's Aarey Colony For 15 Days, Court Says Amid Protests

The court will hear a petition challenging proposed felling of over 2,600 trees in this area in north Mumbai from September 30. 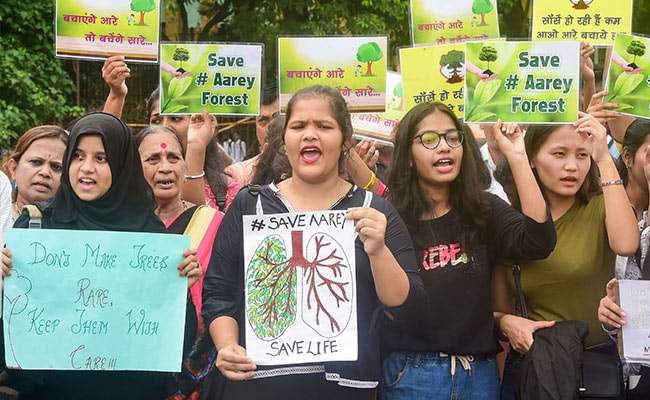 Residents protest against cutting of trees in Aarey Colony for Metro project.

The Bombay High Court on Tuesday said trees will not be cut down in Mumbai's Aarey Colony for Mumbai Metro's car shed till September 30.

The court will hear a petition challenging the proposed felling of over 2,600 trees in the north Mumbai area from September 30, said a division bench of Chief Justice Pradeep Nandrajog and Justice Bharati Dangre.

The bench would start hearing the petition on September 30. On September 13, the tree authority issued final permission letter to Mumbai Metro Rail Corporation Limited for felling or transplanting 2,646 trees, the petitioner's counsel said.

However, no trees can be cut for the next 15 days, because under the Maharashtra (Urban Areas) Protection and Preservation of Trees Act, 1975, this much period has to be granted to citizens to raise objections, he said.

"The 15-day period gets over on September 28. We would like MMRCL to make a statement that it would not start cutting trees till September 30," he said.

MMRCL's advocate said he need not make official statement but the authority was not in a "hurry" to cut the trees.

"It is understood that they (MMRCL) will not chop the trees," Chief Justice Nandrajog then said.

As per the petition, on August 29 the Tree Authority approved MMRCL's proposal to cut 2,185 trees and uproot and replant elsewhere another 461 trees.

Green activists are opposed to felling of trees in Aarey Colony, which, together with Sanjay Gandhi National Park, is known as the green lung of the metropolis.

MMRCL and the BMC have argued that metro is in larger public interest.

Metro will wean people away from using cars, taxis and two-wheelers and result in sharp reduction in pollution, the two agencies said.

MMRCL in its affidavit also said Aarey Colony was not a naturally forested area as claimed by the petitioner.

The delay in construction of the car shed will cause a loss of Rs 4.23 crore per day, it said.

Four petitions have been filed on the issue. The petition filed by NGO Vanshakti seeks a direction to the government to declare Aarey a forest area.

The high court on Tuesday said it would look into the question whether Aarey Colony is a forest, and if it is not, can the court issue a direction that it be declared a forest.