An HDFC Bank branch in Mumbai's Fort area installed iron spikes on the pavement outside to prevent homeless people from sleeping there. 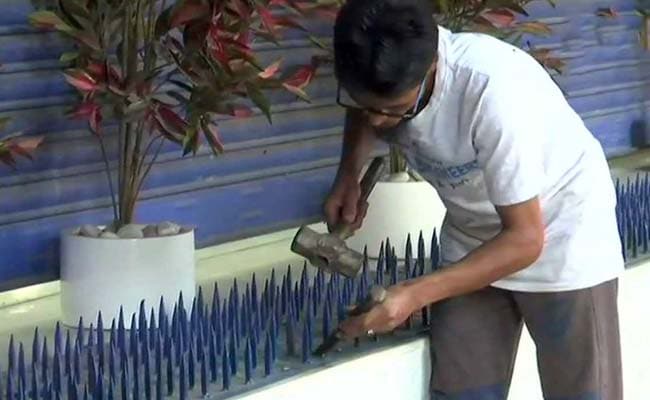 Mumbai: A prominent bank in Mumbai is facing massive outrage over its unusual move to put up iron spikes on the pavement outside a branch, to prevent the homeless from sleeping there. Responding to the public anger, especially on social media, the HDFC bank on Tuesday assured that it would remove the spikes outside its new Fort Branch immediately.

"We sincerely regret the inconvenience caused to the public by the installation of the spikes at our Fort Branch, as part of the recent renovation. We're having the spikes removed on priority," the bank tweeted.

Promoted
Listen to the latest songs, only on JioSaavn.com
The multiple rows of iron spike were panned as a public hazard when they appeared recently. A journalist drew attention to the feature in his tweet. "An eye-catching response to Mumbai's homelessness crisis from HDFC Bank (Fort branch)," commented Simon Mundy.

As others have pointed out, these anti-homeless spikes from @HDFC_Bank Fort branch are not only a depressing gesture towards Mumbai's many rough sleepers, but could also impale any pedestrian unlucky enough to trip and fall in this crowded passageway https://t.co/Eb897CK4fY

On Twitter, people hit out at the bank for what they called a drastic move to prevent homeless people from sleeping on the pavements in the busy metro.

@HDFCBank_Cares
This photo is of your newly opened branch at mg road fort mumbai, besides fabindia. Nice modern branch. BUT Why these hideous spikes?
What if a kid/ elderly or physically disabled person falls on them and get seriously hurt? May lead to very bad PR disaster. pic.twitter.com/jnB1GhSrbS

Many posted photos of what looked like a bed of nails on social media. Some flagged caution, saying the spikes were a danger to pedestrians, particularly elderly people and children. Others accused the bank of extreme insensitivity.

A Twitter user tagged HDFC Bank and said, "This photo is of your newly opened branch at MG Road Fort Mumbai, besides Fabindia. Nice modern branch. BUT Why these hideous spikes? What if a kid/elderly or physically disabled person falls on them and gets seriously hurt? May lead to very bad PR disaster."
Comments
HDFC BankHDFC Bank MumbaiAnti-Homeless Spikes