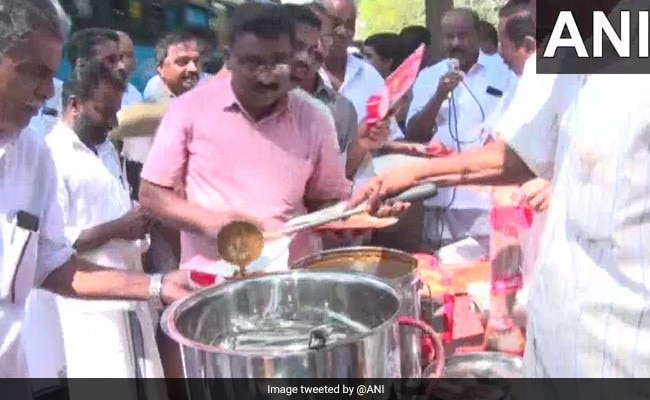 Amid reports of beef being dropped from the menu for state police trainees in Kerala, the Congress workers distributed beef curry and bread in front a police station in Kozhikode on Tuesday.

"This is a clear sign of Kerala CM Pinarayi Vijayan's Sangh leanings. He met (Prime Minister Narendra) Modi immediately after taking oath as Chief Minister and after an understanding with the BJP, he appointed Loknath Behera as Director General of Police. Loknath Behera had given a clean chit to Modi and Amit Shah earlier in Gujarat riot case. Now he is implementing Sangh agendas by the admittance of Pinarayi Vijayan. Congress will expose Pinarayi Vijayan's double stand all over the state," Mr Kumar told reporters in Kozhikode.

However, earlier this week, the Kerala police department said that reports of beef being omitted from the menu prescribed for the newly trained police batch are baseless.

The clarification came after a section of media carried reports that beef has been omitted from the menu.

"As per the decision of the Mess Committee which consists of trainees' representatives and police officers, they were instructed to prepare healthy meals with food available in their respective areas. The aim is to ensure that the trainees get the energy they need through diet, " the statement issued by the police department read.

2 Kerala Teachers Sent On Leave Over Pamphlets With Religious Symbols