Kuldip Sahota, contesting the Ludlow constituency, demanded a Tory party investigation after Philip Dunne said he was "speaking through his turban" . 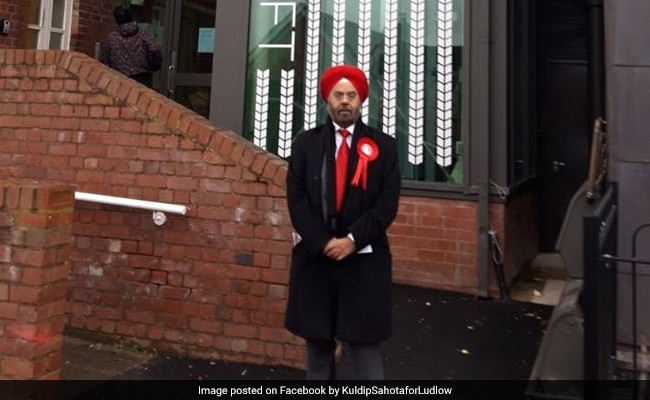 I was shocked that someone who was an MP for 14 years would make derogatory comment: Kuldeep Sahota

A British Sikh candidate contesting the December 12 UK General Election for the Opposition Labour Party has accused his Conservative Party rival of insulting remarks that targeted his turban during a poll hustings in the West Midlands region of England.

Kuldip Sahota, contesting the Ludlow constituency in Shropshire, demanded a Tory party investigation after Philip Dunne said he was "speaking through his turban" during an exchange over the region''s education budgets, attracting gasps from the audience.

"I was shocked and deeply hurt that someone who was an MP for 14 years would make such a derogatory comment about the Sikh faith. This is extremely insulting to the Sikh community," said Sahota.

"These are the kind of offensive comments I remember receiving in the 1970s. They have no place in modern Britain and they certainly have no place in our Parliament. I hope the Conservatives will investigate the matter immediately," he said.

Dunne, a former minister, issued a statement apologising for the remarks as the fallout of the exchange began attracting shocked comments across social media.

"I apologised to Kuldip Sahota for my comments last night. I apologise again unreservedly for the offence caused," said Dunne.

Tanmanjeet Singh Dhesi, the UK's first turban-wearing Sikh to be elected as a Labour Party MP in the House of Commons in the last General Election in 2017, took to Twitter to condemn the exchange between the two candidates and demanded that British Prime Minister Boris Johnson take action to prevent "racism festering further" within the Conservative Party.

"This attack on the turban, which we consider a crown, is an attack on the entire Sikh community, who fought and died for Britain wearing those same turbans," said Dhesi, a Labour candidate from Slough in south-east England.

"The Conservatives must suspend him immediately and strip him of his honour. Anything less than that will be condoning blatant racism," he said.

Sikh Federation UK issued a statement to brand the incident "nothing less than blatant racism" and called for action by the Conservatives.

Heather Kidd, the Liberal Democrat candidate for Ludlow who was present at the poll hustings on Wednesday night, added: "The audience was obviously shocked. It was the worst kind of unthinking Tory prejudice."

Britain's political parties have been battling claims of religious prejudice, with the Opposition Labour Party under attack over alleged anti-semitism within its ranks and the ruling Tories over Islamophobia.

The focus has been on Scotland over the last few days, as Labour was forced to deselect its candidate Safia Ali from contesting from the Falkirk seat in next month''s elections over allegations that she made anti-Semitic posts on Facebook.

The move came just as Johnson apologised for Islamophobia with his party ranks and pledged an inquiry into all forms of prejudice if he goes on to win the election.