Mothers with toddlers in their arms also participated in the march that was organised by 45 civil society organisations on the occasion of Savitribhai Phule's birth anniversary. 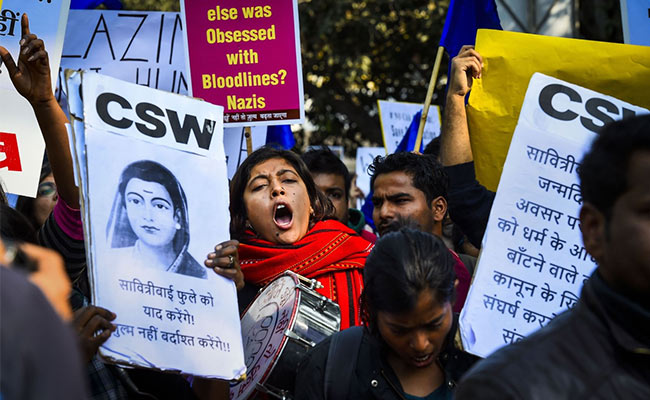 The march culminated at the Jantar Mantar.

Women and members from the queer and transgender communities took out a protest march from Mandi House to Jantar Mantar in the national capital against the Citizenship (Amendment) Act on Friday.

Cries of "Halla Bol" and "Azaadi" rent the air as they voiced their dissent against the law.

Mothers with toddlers in their arms also participated in the march that was organised by 45 civil society organisations on the occasion of Savitribhai Phule's birth anniversary.

Voices are being raised against the "divisive" agenda of the government, said Uttara, who had come with her four-year-old daughter Ifrit, for the protest.

Uttara was among the over 600 people who took to the streets in Lutyens' Delhi on Friday.

"I am here to raise slogans," said eight-year-old Airish, who was accompanied by his mother Ashok Kumari.

Kumari said he has seen all the events unfold on news channels.

"He was curious to know why is it all happening. I brought him to the protest so that he knows that there are also transgenders and queers, and how they need to be respected. I wanted him to learn gender equality," she said.

Shanti Devi, a labourer, who had come from Malviya Nagar, said, "Instead of bringing such laws, the government should focus on tackling issues such as poverty, and ensure people like us are fed properly."

The march culminated at the Jantar Mantar.