With "Azadi" Slogans, Thousands Of Women Take To Streets All Over India 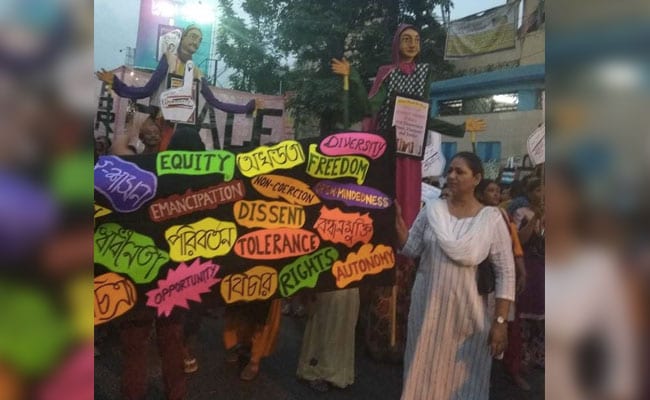 Women voters have recently become a significant force in the elections in the country.

Just a week before elections, thousands of women hit the streets across the country today, lending voice to an unprecedented protest against the current environment of hate and violence, where even "freedom of speech is curbed". The women say the march is meant to claim their constitutional rights.

Over the last decades, women voters have become a significant force in the elections in the country. In the last national elections of 2014 in which the BJP emerged as the single largest party, a record 65.3 per cent the country's 260 million women had voted.

Over the last five years, the BJP has pushed through key welfare schemes women. The list includes the flagship "Beti Bachao Beti Padhao (Save the girl child, educate her" and the Ujjwala Scheme, that provides subsidised cooking gas to rural women.

But the women want 33 per cent reservation in jobs and politics. Raising slogans of "Azadi lekar rahenge" they held 150 processions across 20 states.

Rights activist Aruna Roy slammed the centre for its "repressive" policies. "If we get this government back, women will lose two fundamental rights--right to freedom of expression and right to equality-- because they (centre) are threatening to change the Constitution," she was quoted as saying by news agency Press Trust of India.

"For me, it is absolutely important as a woman that this party does not come back. The last four years have seen the culture of politics change in this country. Violence has become the norm, hatred has become a value. How can I let my country go that way?" the activist said.

At the march in Delhi, Sumedha Bodh, a representative of the Rashtriya Dalit Mahila Andolan, said although women vote, their voices are rarely heard. "Modiji speaks about ''vikas'' (development), but there is no vikas for women. Caste-based politics will not work. If women are not given their rights, we will find an alternative," she said.