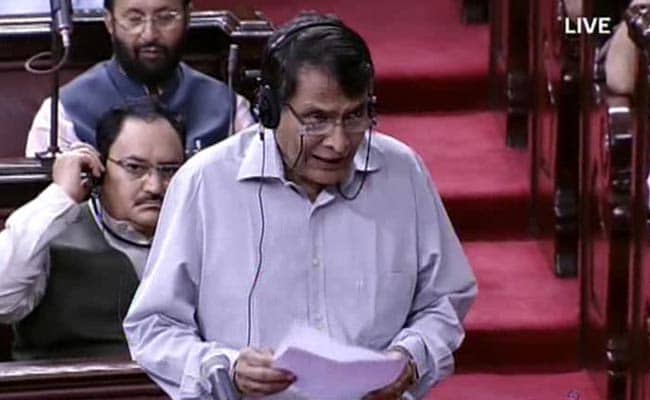 New Delhi: Railway Minister Suresh Prabhu told Parliament today that a flash flood caused the swollen Machak river to overflow and wash out a section of the rail tracks, leading to the derailment of two trains last night in Madhya Pradesh.

Making a suo motu statement on the incident amid slogan-shouting by Congress members against the suspension of their colleagues in the Lok Sabha, Mr Prabhu said in the Rajya Sabha that 12 people had been confirmed as having died in the accidents. He said the Railways was making all possible efforts to rescue passengers.

The Madhya Pradesh government has said that at least 28 people have died. About 25 are feared missing. In overnight operations made difficult by heavy rain and flooding, over 300 people were rescued.

Mr Prabhu told Parliament that he would visit the accident site, about 160 km from state capital Bhopal, and review relief and rescue operations.

Mr Prabhu made the statement soon after the House mourned the death and injuries in the accident.

Amid the noise created by Congress lawmakers, Leader of the House Arun Jaitley egged Mr Prabhu to rise and make his statement, Mr Prabhu started to read out from what appeared to be a full-page statement, but the slogan-shouting drowned out his voice.

Leader of the Opposition Ghulam Nabi Azad was seen calming down Congress members as Mr Prabhu hastily said his junior minister were going to the accident site and left the House.