View Of Living Quarters For Indians In Warship Bringing Them Home. Watch

Over 750 people will be brought back to the country by INS Jalashwa in the first phase under Operation Samudra Setu. 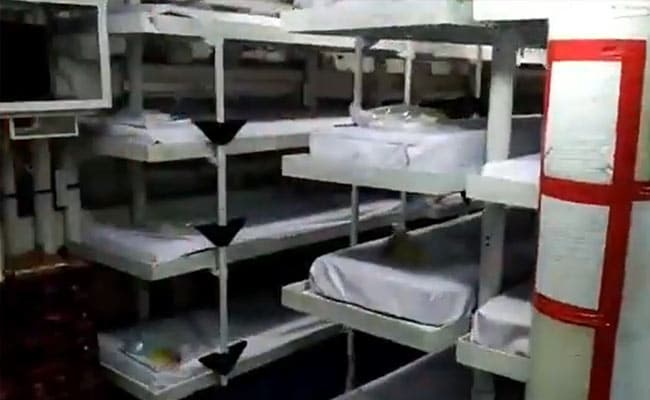 750 people will be brought back by INS Jalashwa in the first phase under Operation Samudra Setu.

A camera pans to a neatly kept bed before moving across to a walkaway with bunk beds on either side. A number of people, dressed in a blue uniform, are seen preparing the beds and placing a bottle of water along with a tray of what seemed to be fruits. The 44-second video taken on board INS Jalashwa gives an insight of the living quarter where the Indian nationals will stay during their journey from Maldives to Kochi, where they will disembark. Another video from inside the warship shows a man in a protective suit sanitizing the lobby.

These videos shared by the Ministry of Defence shows the level of preparations that has been put in place by the Navy for the massive repatriation plan to bring back 750 Indian nationals in the first phase under Operation "Samudra Setu".

A look into the living quarters prepared for the Indian citizens being embarked from Malé.#INSJalashwa#SamudraSetupic.twitter.com/L1nNZw8Hbt

Special emphasis were given to COVID-19 protocols at emigration counters in Maldives as videos shared by the Indian diplomatic mission showed. Indian nationals were seen standing at an arm's distance and wearing face masks as they waited for their turn while officials at the counter were seen with protective suits. In another video, people are seen sitting two rows apart in a bus that will take them to the warship.

Passengers undergoing necessary procedures @VelanaAirport. Thereafter, they will be ferried to the Male' port to board #INSJalashwa. #MissionVandeBharat
Operation #SamudraSetu@MEAIndiapic.twitter.com/DvGLqrKEdo

The Indian nationals will be charged USD 40 as the evacuation service charge, the High Commission of India in the Maldives said in a statement.

Satish Kumar, who lost his job in the Maldives in February, said he was looking forward to going home.

"You look in any corner of Male, you can hear about a positive case. Male is very dense (and) the community spread is high," Mr Kumar, 55, told news agency AFP.

Maldives has reported 642 virus cases with two deaths so far.

The Indian nationals will be ferried to India today on Navy warship INS Jalashwa as part of an massive repatriation plan launched by the government to bring back stranded citizens from around 13 countries.

The amphibious warship arrived in Male on Thursday to bring back 1,000 Indian citizens, at a time, who have been stranded in the island nation due to the COVID-19 lockdown put in place to check coronavirus spread.

The repatriation process is a part of the Navy's Operation Samudra Setu and is progressing in close coordination with the Ministries of Defence, External Affairs, Home Affairs, Health and various other agencies of the Centre and state governments.

Another amphibious warship INS Magar is also on way to the Maldives to bring back Indian nationals.