Vekaiah Naidu also said everybody celebrated the Supreme Court's unanimous verdict on the Ayodhya dispute, clearing the decks for the construction of a Ram temple. 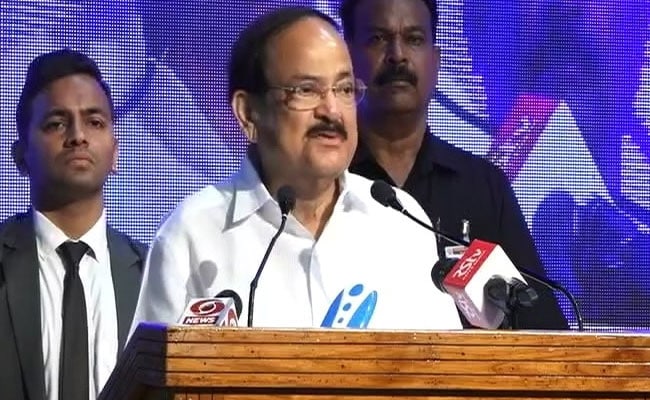 The vice president said the Ayodhya verdict was celebrated by people. (File)

Vice President M Venkaiah Naidu on Saturday invoked Mahatma Gandhi's "suggestion" to disband the "Congress as a platform" after India attained independence from the British in 1947.

Mr Naidu also said everybody celebrated the Supreme Court's unanimous verdict on the Ayodhya dispute, clearing the decks for the construction of a Ram temple.

The vice president was speaking as the chief guest to mark the 40th Foundation Day of the Institute of Rural Management, Anand (IRMA) on the National Dairy Development Board (NDDB) campus.

"Mahatma Gandhi gave two suggestions after Independence. First, he asked for the closure of the Congress as a platform. I am telling you for your information that the Congress was primarily a movement of people of different ideologies," he said.

The vice president recalled that people had gathered under the leadership of Mahatma Gandhi, Gopal Krishna Gokhale, Bal Gangadhar Tilak with the goal to achieve independence.

"They came together and fought for independence. When independence was achieved, that work (struggle) was finished and there was no need for any discussion," Mr Naidu said.

He said Mahatma Gandhi's "second suggestion" to go back to villages is unfortunately forgotten. "We have (instead) shown our backs to villages," he added.

The vice president said the Ayodhya verdict was celebrated by people.

"People are happy over a meaningful solution (to the Ayodhya dispute)...because we have put an end to these things behind and moved on. The solution has been welcomed by one and all," he said.

Delivering a historic verdict on November 9, the top court backed the construction of a Ram temple by a government trust at the disputed site in Ayodhya and ruled that an alternative five-acre plot must be found for a mosque in the Hindu holy town.

Mr Naidu also recalled the contribution made by Verghese Kurien, who is known as the Father of White Revolution.

Mr Kurien had also played a crucial role in finding IRMA and NDDB.

"I salute his memory, foresight, and the initiatives he had taken. And the result is for us to see. The regions where this Amul movement reached are developed and other areas are comparatively less developed. It's not only a beautiful but also a dutiful place. When you combine beauty with duty, it becomes multi (sic).

"It was here that white revolution was conceptualised and implemented. Thanks to the nurturing efforts of Dr Kurien and his team, including dairy farmers, India is today the world''s largest producer of milk," Mr Naidu said.

The vice president also visited the native house of Sardar Vallabhbhai Patel- the first Home minister of India-who was born in the nearby village of Karamsad.

"The government has now decided to construct the third phase of rural roads under which roads (with the length of) 1.2 lakh kms will be constructed and developed. By 2024, every village and villagers will get drinking water," he said, adding that more than 8 crore LPG gas connections were made available under the Ujjawala Yojana.

The vice president also highlighted the need for water conservation. "Water crisis is possible in the coming days. In fact it can be seen even now, but we are not paying much attention to it. Joining rivers, cleaning them, conserving lakes, and reducing, reusing and recycling water is a vital mantra," he said.

The vice president appealed to people to participate in projects undertaken by the government.

"The country has this mentality that every work will be done by govenrment and we can sit idle. This will not do. Whether it is Clean India Clean Water programme, or ''Beti Padhao, Beti Bacho'', ''Fitness India'', or Yoga...all these programmes should become people''s programmes, with people''s participation, and this is vital for their success," he said.

Mr Naidu said Amul is a successful example of people's participation. "This is a great revolutionary story of India, Gujarat, Anand, and Amul," he said.

"Proper training and mentoring is a pre-requisite to turn village farmers into successful entrepreneurs," the vice president said while highlighting the importance of institutes like IRMA.

"White Revolution was achieved not by mass production, but production by masses. This helped small and marginal farmers to reap the benefits of the economy of scale," he said.

"For the dream of decentralised village industry to materialise, we will need sufficient number of well-trained professionals to manage such industry and institutes," he said, adding that the rural economy will be vital for India to become a $5 trillion economy.

"Our prime minister has given a call to double farmers' income by 2022. If this has to be achieved, we need to adopt a multi-pronged approach. There has to be a renewed approach to agro industries, cold storage, warehousing, food processing, dairies, fisheries, value addition etc," he said.

The vice president further said technology will open up new business ventures for farmers in rural India by way of digital payment and e-commerce.