The shrines of Kedarnath and Badrinath along with several other areas are virtually wearing a thick blanket of snow. 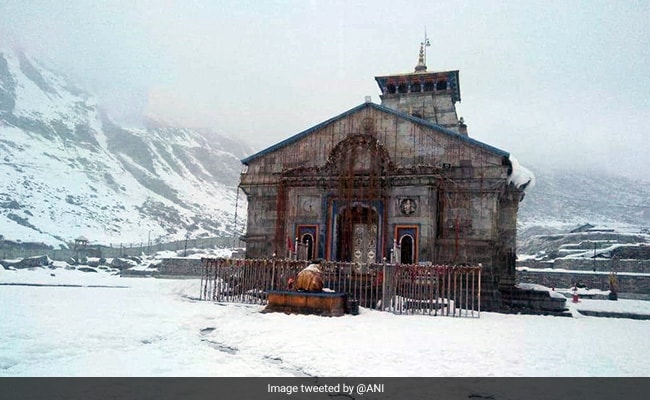 A sheet of snow covers the area around Kedarnath shrine

Uttarakhand recorded the season's heaviest snowfall as an intense cold wave gripped the hill-state, leading to closure of schools in several districts, the Met office said.

The higher reaches of Garhwal Himalayan region is experiencing continuous snowfall since Wednesday night, an official said, adding that the plains have been lashed by rain.

The shrines of Kedarnath and Badrinath along with several other areas are virtually wearing a thick blanket of snow, he said.

Due to the cold wave conditions, government and private schools in several districts of the state will remain closed on Friday, he said.

Uttarkashi District Magistrate, Ashish Chauhan, has ordered the closure of all educational institutions including Anganwadis in the district on Friday due to prevailing cold wave conditions and heavy snowfall, an official said.

The state capital of Dehradun has been lashed by heavy rain since Wednesday evening and the streets are wearing a deserted look as people are forced to stay indoors.

However, due to the heavy snow, tourists are making a beeline for the popular ski resort of Auli to indulge in skiing and snow-boarding on the snow-covered mountain slopes.

The meteorological department has ruled out the possibility of any improvement in weather over the next couple of days.

The state is likely to experience more snow and rain in the next couple of days, the weather department official said.