Sources said he was given a traditional welcome with flowers and ''teeka'' and he entered the hotel along with his family through its back entrance in view of security threat. 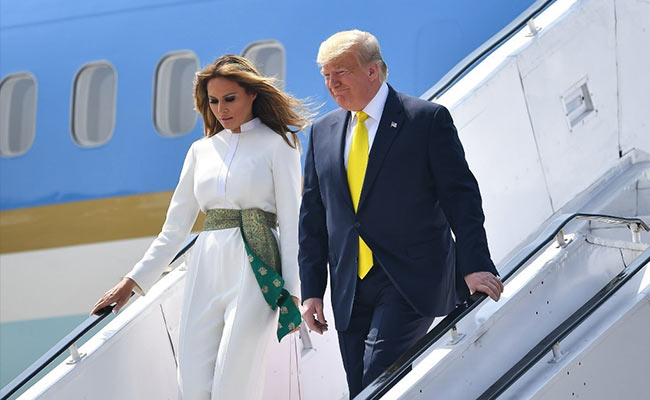 US President Donald Trump was accorded a traditional welcome as checked into the ITC Maurya hotel after arriving in the national capital on Monday night in the final leg of his whirlwind visit to India.

Donald Trump, who reached Delhi after attending the Namaste Trump event at Ahmedabad and visited the Taj Mahal, is staying at the Grand Presidential Suite of the five-star property located in the Diplomatic Enclave in Chanakyapuri.

Sources said he was given a traditional welcome with flowers and ''teeka'' and he entered the hotel along with his family through its back entrance in view of security threat.

He had dinner around 9 pm, they said.

The entire hotel has been done up in a way to reflect the "Namaste Trump" tagline and also the branding of ITC Maurya, the logo of which is "Namaste".

All the rooms of the hotel have been booked for the US delegates accompanying Trump for his 36-hour-long maiden visit to India.

The hotel is under a heavy security cover with personnel from Delhi Police and US Secret Service working in close coordination to ensure the security of POTUS and his family.

He has joined the likes of former US presidents George W Bush, Bill Clinton, Barack Obama, who have stayed at the 438-room property during their visit to India.