Rahul Gandhi stepped down as Congress president after the party's disastrous results in national elections that ended in May this year. 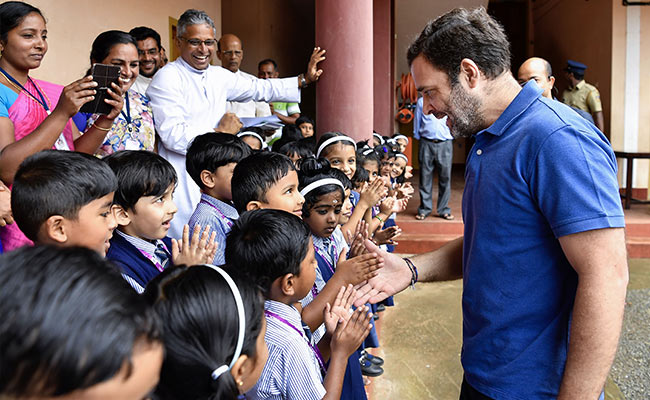 Congress leader Rahul Gandhi on Thursday sent out a Teacher's Day greeting, wishing anyone who has taught him anything over the years. A special mention, however, was reserved for his detractors for their "vicious barbs, false propaganda and anger", that he said had only made him more resilient.

September 5, the birth anniversary of former President Sarvepalli Radhakrishnan, is observed in India as Teacher's Day. Dr Radhakrishnan was of India's most distinguished scholars and an exemplary teacher.

On #TeachersDay I thank all those from whom I've learnt, over the years 🙏

That includes the army of social media trolls, some journalists-with-an-agenda & my political adversaries, whose vicious barbs, false propaganda & anger has taught me a lot & made me much stronger 🙏

The parliamentarian stepped down as Congress president after the party's disastrous results in national elections that ended in May this year. The Congress barely managed to increase its abysmal tally over the 2014 polls which was the party's worst electoral performance.

Mr Gandhi, who led the party's acerbic campaign against Prime Minister Narendra Modi, himself lost his family stronghold seat of Amethi in Uttar Pradesh to union minister Smriti Irani. He was elected to the Lok Sabha from the second seat he contested - Wayanad in Kerala.

Over the years, Rahul Gandhi has been the subject of derision from his critics even though his supporters and Congress leaders have abidingly backed him up.

In one of his most memorable parliamentary appearances last year, Rahul Gandhi had startled Prime Minister Narendra Modi by walking across to embrace him, moments after a speech in which he said, "You may call me Pappu, but I don't hate you."