The student raised slogans against the amended citizenship act when Shah was talking about the CAA at the poll meeting in Babarpur constituency on Sunday evening. 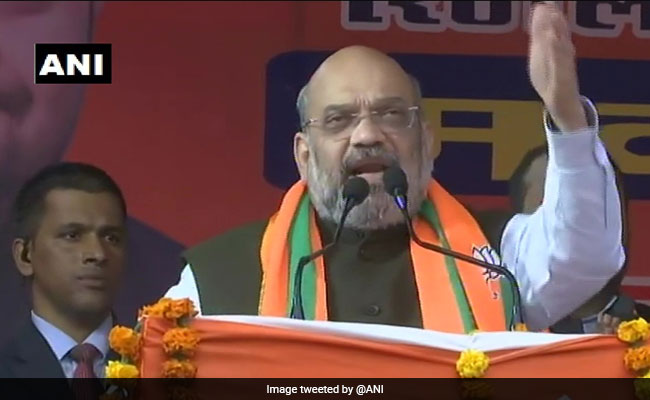 The youth was released after he gave his residential address and his family was informed, Amit Shah said.

The student raised slogans against the amended citizenship act when Amit Shah was talking about the CAA at the poll meeting in Babarpur constituency on Sunday evening.

The minister noticed a commotion during his speech and repeatedly asked security personnel to rescue the student. He sought to gain back the crowd's attention by asking them to raise Bharat Mata Ki Jai slogan.

"Let him go. Security rush there and take him away safely," he said.

The BJP leaders present on the occasion denied having any information about the youth and whether he was thrashed.

"I was on the stage and heard Shah ji asking policemen to save the boy. But, there were many people there and it was difficult to determine what had happened," said a Delhi BJP leader present at the election meeting.

A purported video of the incident on social media showed people throwing chairs at someone during the rally.

A senior police officer said that the 21-year-old student was at Amit Shah's meeting to protest against the amended citizenship act.

"The security personnel deployed at the rally handed him over to police. He was brought to the Welcome police station where he was examined. He did not have any ID proof. He did not sustain any major injuries," said the officer.

The youth was released after he gave his residential address and his family was informed, he said.

The officer added that the youth was a student of Delhi University's School of Open Learning and he lived with his parents in South Delhi's Sangam Vihar area.