Rahul Gandhi, taking a swipe at the government over rising crimes against women, had said, "Narendra Modi had said 'Make in India' but nowadays wherever you look, it is 'Rape in India'."

Rahul Gandhi, who was not allowed by the Speaker to respond, spoke to reporters

Rahul Gandhi's "Rape in India" comment attacking the government at an election rally in Jharkhand exploded in parliament on Friday as the ruling BJP, including top ministers like Smriti Irani, tore into the Congress leader. The Lok Sabha adjourned repeatedly amid unrelenting protests and cries of "shame" from the government benches.

"For the first time in history, a leader is giving a clarion call that Indian women should be raped. Is this Rahul Gandhi's message to the people of the country? He should be punished," Smriti Irani said in the Lok Sabha.

Rahul Gandhi, who was not allowed by the Speaker to respond, told reporters outside: "I won't apologise... Let me clarify what I said. I said the PM keeps talking about 'Make In India'. So when one opens the newspaper one hoped that one would see news about it, but what do we see when we open the papers? We see so many cases of rapes."

He accused Prime Minister Narendra Modi and the BJP of trying to divert focus from the protests in the northeast over the Citizenship Act.

In parliament, BJP MPs raised slogans against Mr Gandhi as Ms Irani continued her attacks on the Congress MP. "Not all men are rapists. This is an insult to India... Rahul Gandhi is touching 50, and doesn't realise that such a statement seems like an invitation to rape in India," said Smriti Irani.

"People who make such remarks have no moral right to be member of this house," Defence Minister Rajnath Singh said.

DMK's Kanimozhi, however, defended Rahul Gandhi questioning the government over rising crime against women. "We respect the PM's Make in India initiative. We want economy to grow. But what is happening in the country? That is what Rahul Gandhi intended to say. Unfortunately, Make in India is not happening and women in the country are being raped. This is a concern," Kanimozhi said.

Taking a swipe at the government led by Prime Minister Narendra Modi over rising crime against women in the country, Mr Gandhi had said, "Narendra Modi had said 'Make in India' but nowadays wherever you look, it is 'Rape in India'. In Uttar Pradesh, Narendra Modi's MLA raped a woman, then she met with an accident but Narendra Modi did not utter a word."

1. For burning the North East.

3. For this speech, a clip of which I'm attaching. pic.twitter.com/KgPU8dpmrE

"Narendra Modi says 'Beti Bachao, Beti Padhao' but he never told from whom should daughters be saved. They should be saved from BJP's MLA," Mr Gandhi said, referring to the programme run by the government that seeks to empower the girl child and encourage parents to educate them.

The war of words over crime against women came after recent cases that have angered the country. 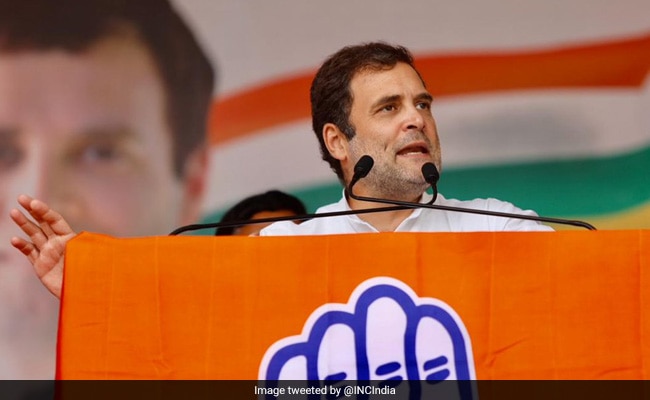 A young veterinarian was raped and her body was burnt on a highway near Hyderabad by four men. The accused were shot dead by the Telangana Police, who said they tried to run away when they were brought to the crime scene for a reconstruction as part of the investigation.

In Uttar Pradesh, a woman from Unnao was set on fire by five men - two of them who were accused of raping her - when she was on her way to a court for a hearing in the rape case.