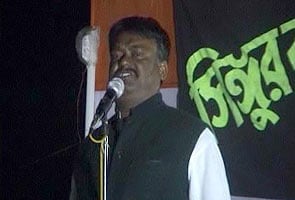 Singur: In an attempt to placate the restive Singur villagers, a West Bengal minister has said that "people would frame laws even if the court verdict went against the government" while assuring the problem will be resolved by January.

"Mamata is always worried about people of Singur, she is always figuring out how to give farmers their lands back. We believe our leader is behind us, we request you to keep the faith, you will see results. We believe we will find a solution to the Singur problem by January. I have spoken to her, she worries about you much more than you think. There was a delay in bringing the law. When she took oath as the Chief Minister, she decided to abide by the law, but when we don't have a law in our favour, people of Singur will show how to create a new one," Minister of State for Agriculture Becharam Manna told people gathered to observe "Singur Divas" at Beraberi market in Singur on Sunday.

The minister also asked the people to beware of media men who, he alleged, were spreading wrong information as also unwanted 'elements', referring to the detainment of six CPI(ML) Liberation workers from Bajeberia village in Singur by the police.

Singur farmers started their agitation in 2006 during the then Left Front government after their lands were allegedly acquired against their will for the Tatas Motors' car project.

The farmers, who were promised by the then Opposition leader Mamata Banerjee that 400 acres of the acquired land would be returned to them if her party came to power, had been the pillars of the volatile anti-land acquisition movement which ultimately forced the automobile major to shift the plant to Gujarat.

But 18 months into Ms Banerjee's rule, the farmers are yet to get back their land due to a legal row between the Tatas and the state government.

The state government had passed the Singur Land Rehabilitation and Development Act, 2011 but it was nullified by a division bench of the Calcutta High Court following which the state appealed before the Supreme Court, where the matter is pending.

The Supreme Court had issued a notice to Tata Motors seeking its response within four weeks on the Mamata Banerjee-led government's petition challenging that order.

The top court said the suspension of the verdict would continue till further orders.

The police used canes on agitating villagers and burst tear gas shells, and to mark that day the "Singur Divas" is observed every year.