The incident occurred on Friday evening when some local residents rescued the dog from the dug-up pit after it was found crying. 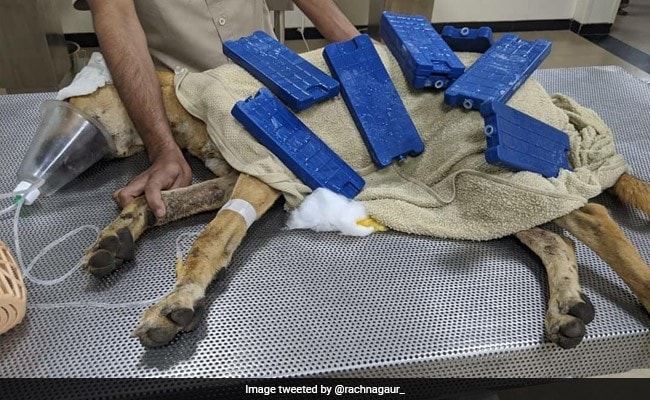 In a cruel act, a group of security guards of an upscale apartment complex in Gurgaon's Sector-49 were caught trying to bury a stray dog they had brutally assaulted with batons, police said.

The incident occurred on Friday evening when some local residents rescued the dog from the dug-up pit after it was found crying.

The dog, that sustained fractures on its legs and head, was taken to a nearby veterinary hospital in the city's DLF Phase 3 where it is currently battling for life.

"On the basis of a complaint filed by animal lovers, we have registered an FIR under relevant sections of the Prevention of Cruelty to Animals Act in Sadar police station and efforts are on to contact the RWA of the society. Further action will be taken against the alleged security personals and their supervisor," said Preet Pal Singh of Gurgaon police.

Around 5 pm on Friday, the street dog had strayed into Uniworld Garden-II, the apartment complex. The private security guards, who were inside, tried to keep it out from the premises but failed. The supervisor later apparently directed the guards to corner the dog at one place and brutally beat it with batons.

"The entire incident was captured on the CCTV cameras where the guards are clearly visible - charging batons at the animal. The dog sustained multiple fractures in its legs and head," the police spokesperson said.

When the dog became severely injured and collapsed on the ground, the guards took it outside the society complex. They dug a pit and were about to bury it inside when some animal lovers intervened and rescued it," the official said.

"Further investigation is on and we may cancel the license of the security firm to operate here in Gurgaon," Mr Singh added.