In the Social Science examination, question number four asked examinees to match six pairs of sub-questions with six sub-answers. The words "Azad Kashmir" formed one of the sub-answers/sub-options. 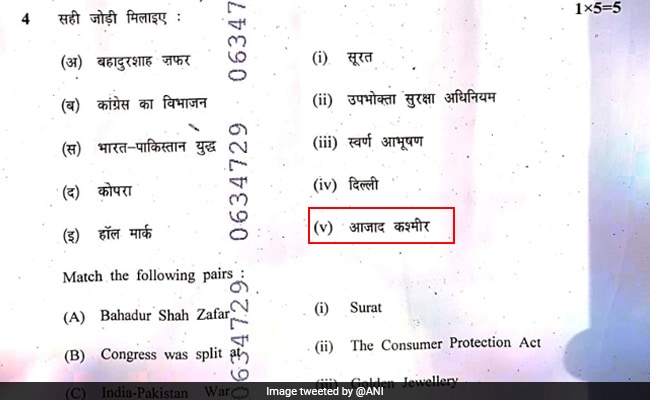 A huge controversy has broken out in Madhya Pradesh after a question in a Class 10 state board examination referred to Pakistan Occupied Kashmir as "Azad Kashmir", twice.

In the Social Science examination, question number four asked examinees to match six pairs of sub-questions with six sub-answers. The words "Azad Kashmir" formed one of the sub-answers/sub-options.

The second time, the question paper asked the students to plot "Azad Kashmir" on India's map. In question number 26, the examinees were asked to plot Andaman and Nicobar Islands, Bangladesh, Azad Kashmir, Betwa River and Nepal on the Map of India.

The development has stoked controversy in the already politically volatile state where the Congress had accused the BJP of "kidnapping 14 MLAs" in an attempt to topple its government.

On the question paper row, attacking the Kamal Nath government, BJP leader Vishwas Sarang said, "Kashmir was ours even before, it will be ours in the future, such questions asked - which fall under the category of treason - is reflective of the mentality of the Congress. Through Congress, Pakistan is implementing its agenda in Hindustan."

Senior Congress leader Narendra Saluja responded: "The CM has taken prompt notice of the highly objectionable development and ordered strict action those responsible for it. Acting on CM's directions, the concerned question paper setter has been suspended with immediate effect."