Ram Nath Kovind is the second Dalit president after KR Narayanan. He is also the first President to have been a member of the BJP and its ideological mentor, the Rashtriya Swayamsevak Sangh.

New Delhi: Ram Nath Kovind today took oath in Parliament's Central Hall as India's 14th President and in his first address said India's unity in diversity was the key to its success. "We are a country of great diversity, yet have shown that unity is the way forward. We are a peaceful nation and are now at a stage where we have to take the country forward... We are proud of our heritage and culture... it is now time we show the world what India is capable of," President Kovind said, echoing the words of his predecessor Pranab Mukherjee in his farewell speech yesterday.

President Ram Nath Kovind recalled his days as a member of Parliament and said, "Often we agreed, sometimes we disagreed. But we learnt to respect each other and that is the beauty of democracy." The 71-year-old former lawyer became the Governor of Bihar in 2015. He is the second Dalit president after KR Narayanan. He is also the first President to have been a member of the BJP and its ideological mentor, the Rashtriya Swayamsevak Sangh.

"I am thankful to you all for giving me the responsibility to be the President of India... I come from a humble background. The journey has been long," Ram Nath Kovind said in his address.

"I will stand by and represent all 125 crore fellow Indians. I understand the massive responsibility that this is. Former Presidents, from Rajendra Prasad to Pranab Mukherjee, all have been great leaders.... I hope to live up to that greatness," he said.

Mr Mukherjee had accompanied the new President to Parliament this morning from the Rashtrapati Bhavan. They were greeted there by Prime Minister Narendra Modi, Vice President Hamid Ansari. 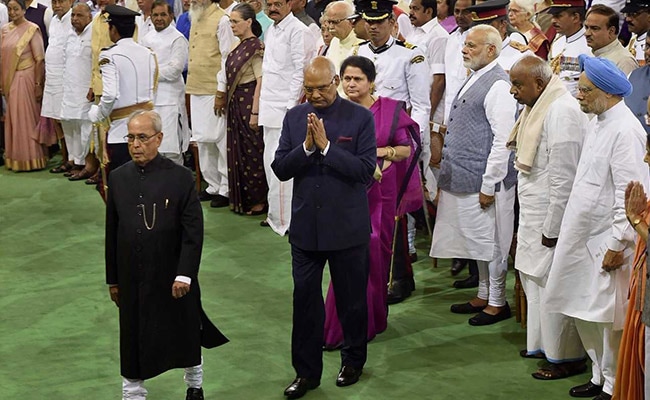 In Parliament, 22 members of Mr Kovind's family watched him take oath. "This is the first time we are entering Parliament. It is a proud moment for us. All of Uttar Pradesh is happy, for the first time a person from the state is becoming President," said Deepak Kovnd, Mr Kovind's nephew.

Promoted
Listen to the latest songs, only on JioSaavn.com
Mr Kovind was sworn in by Chief Justice of India JS Khehar. 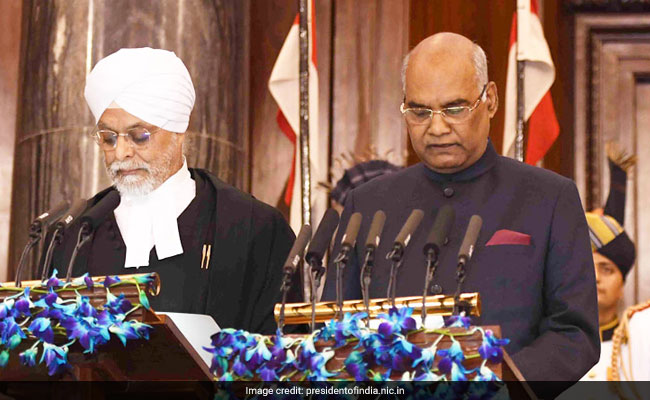 After the ceremony, Pranab Mukherjee gave the new President a tour of the Rashtrapati Bhavan; he will then head for 10, Rajaji Marg, where a freshly-painted British-era bungalow with sloping red-tiled roof and fitted with chimneys, wide lawns and gardens awaits its new resident.

In his farewell address yesterday as the outgoing President, Pranab Mukherjee had underscored the need for unity, pluralism and tolerance. "Gandhiji saw India as an inclusive nation, where every section of our population lived in equality and enjoyed equal opportunity. He wanted our people to move forward unitedly in ever-widening thought and action," he had said.