"Rahul Gandhi took the fight against the Narendra Modi government for the last five years on issues of unemployment and youths," Ashok Gehlot said. 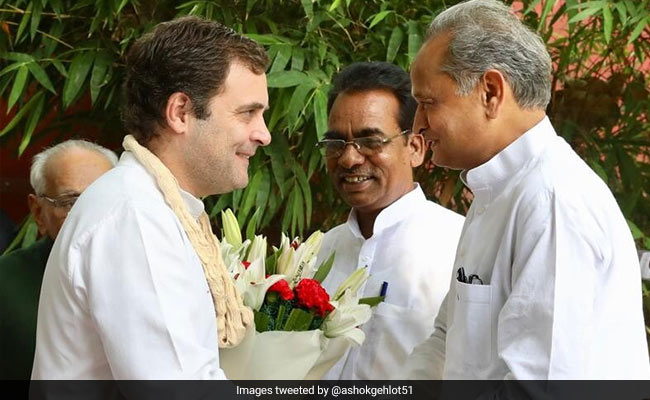 Rajasthan Chief Minister Ashok Gehlot today greeted Congress President Rahul Gandhi on his birthday and urged him to remain the party chief in the interests of the country and people.

Mr Gehlot was at the Congress office to participate in Mr Gandhi's birthday celebrations. After Mr Gandhi left, Mr Gehlot told the media, "We urge Rahulji to take up the leadership of the party in the interests of the country and people."

The Congress President has decided to step down from the top post following the party's dismal performance in the Lok Sabha elections when it won only 52 seats.

Mr Gehlot said, "Rahul Gandhi took the fight against the Narendra Modi government for the last five years on issues of unemployment and youths."

He said the BJP won the general elections by raising the issues of nationalism, religion and valour of the armed forces.

"Today we have 52 seats in the Lok Sabha but the BJP should not forget that the Congress has its organisation in over six lakh villages."

The Chief Minister said all Congress lawmakers have full faith in the leadership of Mr Gandhi. "Rahul Gandhi speaks from his heart. He is not someone whose words and works differ."

(Except for the headline, this story has not been edited by NDTV staff and is published from a syndicated feed.)
Comments
Rajasthan Chief minister Ashok GehlotCongress President Rahul GandhiRahul Gandhi Birthday