Along with Varanasi, other holy sites are also being developed using new technologies, says PM Modi. 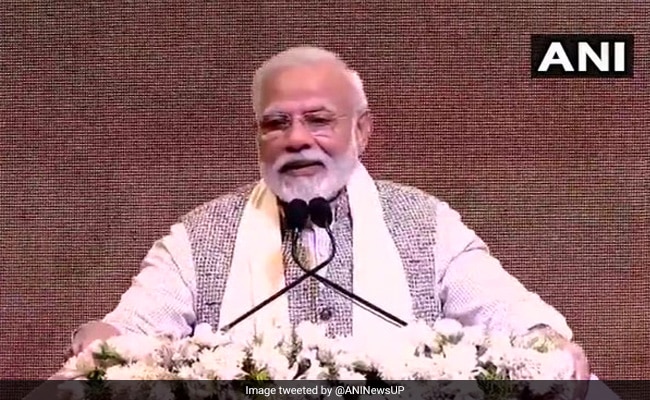 Prime Minister Narendra Modi in Varanasi, Uttar Pradesh, said today that small cities will have a greater say in the development of the nation as compared to metropolitan cities.

"In a transforming India, small cities like Varanasi, Tier-I and Tier-II cities, will add new chapters in the story of the nation's development. Contribution of these small cities will be greater than big metros," said PM Modi while addressing a rally after the unveiling of a statue of Pt Deendayal Upadhyaya.

"The rise of small cities will take the country forward," he said. "It is these small cities that are benefitted more by the schemes of the Centre."

PM Modi said that the government is committed to providing potable water to every household under the 'Jal Jivan Mission'.

"There should be no laxity in the cleanliness mission. In the next five years we will have to work with full strength to provide water to every household under 'Jal Jivan Mission'," the Prime Minister added.

He said that the tourism sector will play a crucial role in achieving a $5 trillion economy.

"Today when we talk about $5 trillion economy in India, tourism is an integral part of it. Besides nature, heritage tourism has a strong role to play in achieving the goal. Also, along with Varanasi, other holy sites are also being developed using new technologies," he added.

PM Modi said that the inauguration of schemes worth Rs 1,200 crore is being done in Varanasi today that includes hospitals, roads, flyovers, beautification of the city, among other things. He said "the government has spent Rs 25,000 crore for the development of Varanasi in the last five years."

Speaking about the memorial and statue of Pt Deendayal Upadhyaya, the Prime Minister said the ethics and thoughts of the late Jana Sangh leader will inspire generations to come.