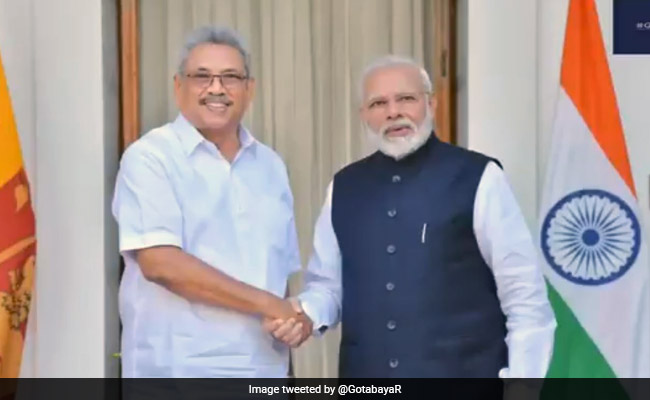 Sri Lankan President Gotabaya Rajapaksa on Monday said that he looks forward to "maintaining warm and mutually beneficial bilateral relations" with India in all aspects.

The newly elected president, who just concluded a "successful" visit to India, said that the "respect" accorded by Prime Minister Narendra Modi-led government during his trip has helped in revitalizing the historical bond between Colombo and New Delhi.

"At the conclusion of a very successful visit to #India, the remarkable welcome, hospitality & respect accorded by @narendramodi & Govt has revitalized the historical bond btw #India & #LKA. I look fwd to maintaining warm & mutually beneficial bilateral relations in all aspects," Gotabaya Rajapaksa tweeted, along with a two-minute video comprising highlights of his trip.

Gotabaya Rajapaksa was received by President Ram Nath Kovind and Prime Minister Modi and was accorded a ceremonial welcome upon his arrival at the Rashtrapati Bhavan.

Gotabaya Rajapaksa said that his country will work closely with India to ensure that the Indian Ocean "remains a zone of peace", and assured that he will take steps to release the Indian fishermen''s boats which are in Sri Lanka's custody.

He also extended an invitation to PM Modi to visit the island nation at a mutually convenient time.

Prime Minister Modi, during the joint statement, said, that he is confident the Sri Lankan Government will pursue the process of reconciliation to meet the aspirations of equality, justice, peace and respect of Tamils.