"This will promote independence of navigation, overflight and rules-based trade in the South China Sea," it said. 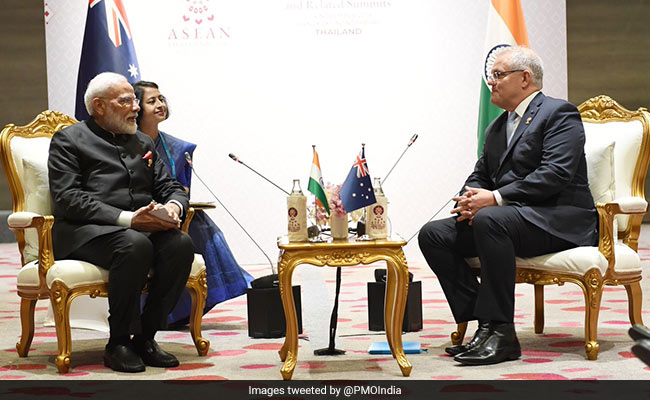 Prime Minister Narendra Modi on Monday held separate bilateral meetings with his Australian and Vietnamese counterparts with a focus on boosting counter-terror cooperation and forging deeper maritime ties in the Indo-Pacific region.

The talks took place on the sidelines of the East Asia Summit.

On PM Modi's meeting with Vietnamese Prime Minister Nguyen Xuan Phuc, the external affairs ministry said the two sides reiterated their desire to promote peace, security and prosperity in the Indo-Pacific region and emphasised on the need to maintain a rules-based order that is based on respect for international law.

"This will promote independence of navigation, overflight and rules-based trade in the South China Sea," it said.

The South China Sea witnessed renewed tension after China deployed a large number of survey vessels in Vietnamese waters including around areas where India's ONGC has oil exploration projects in July.

"The two leaders discussed the threat of extremism and terrorism and agreed to work closely to tackle this menace," it said.

"The two leaders noted that the strategic and economic interests of both countries are converging, which opened up opportunities for working together bilaterally, regionally and multilaterally," it added.

"Noting the enhanced engagement in defence and security fields, both sides agreed to enhance cooperation in maritime domain. The two leaders discussed the threat of extremism and terrorism and agreed to work closely to tackle this menace," the MEA said.

In the meeting, PM Modi reiterated his invitation to Australian Prime Minister to visit India in January 2020 and to deliver his keynote speech at Raisina Dialogue.

Officials said Morrison accepted the invitation. "Both leaders underlined the need to have thorough preparation to ensure a successful outcome from the visit," the MEA said.