The names of BJP leader Mukul Roy and rebel TMC MLA Manirul Islam have been mentioned in the chargesheet, among others, as accused. 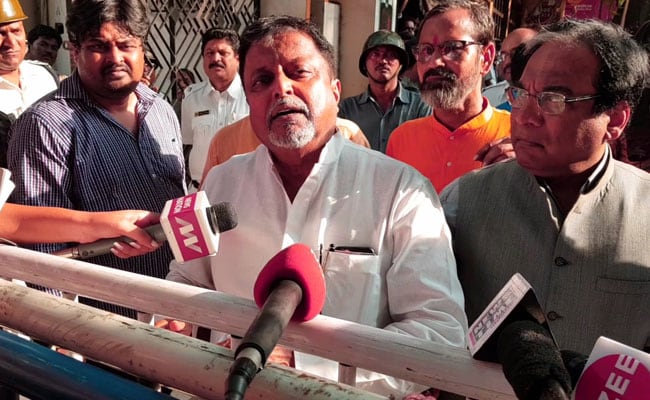 The police have submitted a supplementary charge sheet in a Birbhum district court in the politically significant Labhpur triple murder case of 2010. The names of BJP leader Mukul Roy and rebel TMC MLA Manirul Islam have been mentioned, among others, as accused.

The name of Mr Islam, who joined the BJP earlier this year, reappeared in the supplementary charge sheet after it had been dropped from the previous one filed in 2014, while Mr Roy's name came up for the first time in the case.

The supplementary charge sheet was filed after the Calcutta High Court on September 4 directed the district police to probe the murder case afresh and submit its report within three months.
The police submitted the charge sheet before the Bolpur sub-divisional court on Saturday and named 23 people as accused.

"As per the direction of the honourable high court, we have investigated the matter afresh and submitted the report before the court," Superintendent of Police Shyam Singh said on Sunday.

On June 4, 2010, siblings Dhanu Sheikh, Kotan Sheikh and Turak Sheikh were murdered at Labhpur. The victims' family lodged a complaint accusing 52 people including Manirul Islam, who had then switched from the Left Front constituent Forward Bloc to the Trinamool Congress.

His name had been dropped from the final chargLabhpur triple murder: Mukul Roy becomes accused, TMC MLA''s e sheet in 2014, after the victims' family members told the court that Mr Islam had been named in the FIR by mistake.

However, Zarina Biwi, the victims' mother, later filed a petition in the high court claiming that she was forced to state that Mr Islam was not involved in the case in her statement under Section 164 of Code of Criminal Procedure.

Mr Islam, who joined the BJP earlier this year, is allegedly involved in the several incidents of torture and atrocities on political rivals and has boasted publicly about it. He said in 2014 that he could "crush (his rivals) under his feet". However, many leaders in the BJP's state unit protested openly against his induction.

Mr Roy's name came up for the first time in the case in the supplementary charge sheet. Mukul Roy, who was once considered the second-in-command in the Trinamool Congress, had also joined the BJP in 2017.