One Arrested For Sharing Fake Image Of West Bengal Violence

Basirhat and Bhaduria in West Bengal's North 24 Parganas have been hit by communal riots for the last one week. 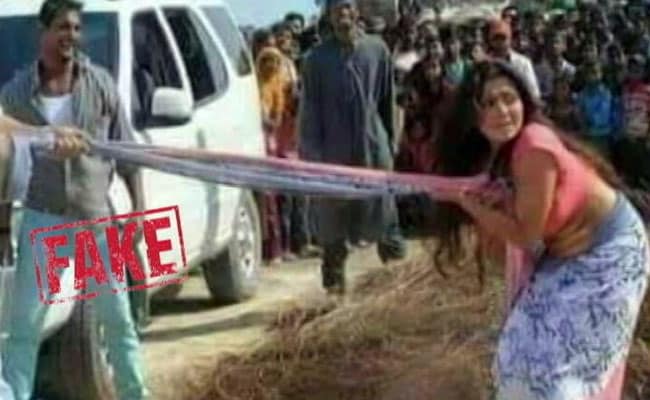 A still from a Bhojpuri film was shared on social media as an image of violence in West Bengal.

Kolkata: The Kolkata Police on Saturday said they have arrested a person for sharing an image from a Bhojpuri film and passing it off as one from West Bengal's North 24 Parganas that has been hit by communal violence leaving at least one dead.

Since being shared, social media users and fact-checking websites like Alt News have pointed out that the still was taken from a Bhojpuri movie called "Aurat Khilona Nahi" released in 2014.

Among those who shared the image, targeting the West Bengal government, on social media was Vijeta Malik, an official of the BJP's Haryana unit.

At a press conference today, Bengal Chief Minister Mamata Banerjee attacked the centre and blamed the BJP, its ideological mentor Rashtriya Swayamsevak Sangh and other groups for the violence.

"Action will be taken for spreading fake pictures and videos. The law will take its own course. I congratulate the people of Bengal for not getting trapped by those spreading rumours and communal hatred. Peace has been restored," she said.

She mentioned the Bhojpuri film image and another photograph of violence from Bangladesh being shared to provoke unrest.

Promoted
Listen to the latest songs, only on JioSaavn.com
Violence flared on Monday in Baduria and Basirhat and spread to other towns in the North 24 Parganas district after a Facebook post by a 17-year-old about Prophet Mohammad angered Muslims. The teen was arrested and has been sent to jail.

Meanwhile, the West Bengal police have put out a series of tweets asking people not to be influenced by fake messages or posts on social media that are designed to create trouble.

Some people are posting old videos of other countries/regions as incidents of West Bengal. This is highly condemnable...(1/2)

(2/2)...Please check Facts with us.We appeal to all not to pay heed to these malicious videos aimed at creating mistrust among communities.