Munnalal Goyal reached the Assembly with his supporters and climbed barricades to reach the Gandhi statue on the Assembly campus to start his dharna. 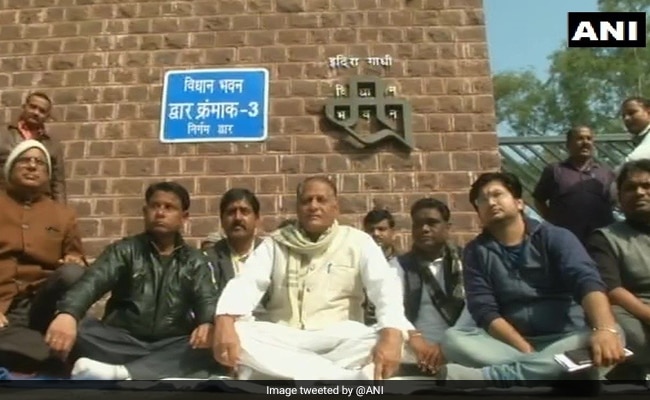 Congress MLA Munnalal Goyal on Saturday staged a dharna against his own party's government near the main gate of the Madhya Pradesh Legislative Assembly.

Mr Goyal, who is considered close to former Union Minister Jyotiraditya Scindia, reached the Assembly with his supporters before noon and climbed the barricades to reach the Gandhi statue on the Assembly campus to start his dharna.

Mr Goyal said that the state government is not fulfilling promises made in its manifesto which the ruling party calls a promissory note. He said, "I am not angry with the Chief Minister or any other minister. But I want the Congress to fulfill the promises else people of my constituency will lose faith in me."

The Leader of the Opposition Gopal Bhargava took pot shots at the state government on Twitter and said, "The deaf and dumb Congress government is not listening to its own legislators. Earlier, Sunita Patel and now Munnalal Goyal have had to protest and remind the government about its failures."

Mr Goyal had written a letter to Chief Minister Kamal Nath on Friday announcing his decision to stage a dharna. He sais, "Since becoming an MLA of the ruling party, I am watching the bulldozers razing the homes of my poor constituents and landless families of the region. They have been left to fend for themselves in chill nights. Congress workers are being humiliated by the administration."

Mr Goyal demanded a fortnightly review of development works in the presence of MLAs of each division to address people's grievances. He said 1200 poor landless people have not been handed the lease papers in Gwalior for the land promised to them. They have been living on the land for past 20 years.

No one has contacted him since he wrote the letter. But he was sure some positive steps would be taken in the next 8-10 days.

Mr Goyal's letter said, "I appreciate the burden you bear as the Chief Minister. You don't have time to meet the MLAs, but it is my duty to guard the interests of people who have elected me as MLA. In the last six months, I have submitted many letters to the ministers, but to no avail."