In January this year, Priya Dutt declared that she was not going to contest but later she changed her mind on the insistence of Congress President Rahul Gandhi. 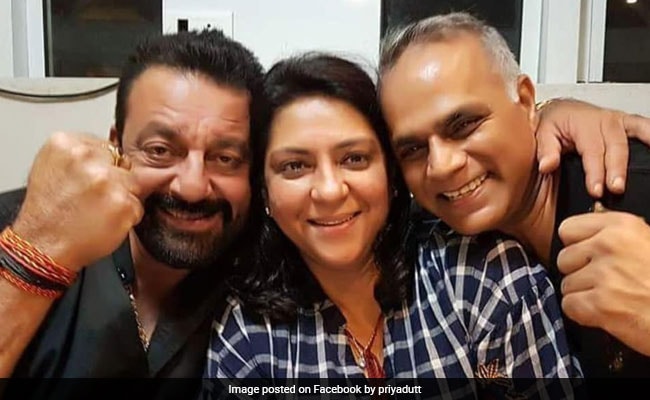 Priya Dutt will be contesting against BJP's Poonam Mahajan

Actor Sanjay Dutt will be accompanying his sister Priya Dutt as she files her nomination on Monday as a Congress-NCP candidate from the Mumbai Northwest constituency.

In a statement released by her campaign team, Priya Dutt said, "Wishing you all a happy Gudi Padwa, Ugadi, Cheti Chand, Navreh & Chaitra Navratri. With your blessings I will be filing my nomination from 29-Mumbai North Central Parliamentary Constituency as a Congress-NCP and others alliance Candidate on 8th April."

"I will be accompanied by MLA Naseem Khan, Ex MLAs Kripashankar Singh, Baba Siddique and my brother Sanjay Dutt," the statement added.

In January this year, former lawmaker Priya Dutt declared that she was not going to contest but later she changed her mind on the insistence of Congress President Rahul Gandhi.

Earlier there were rumours that Sanjay Dutt himself may contest on a Samajwadi Party ticket but himself quashed those rumours last month with a tweet.

The rumor about me contesting for the Loksabha elections is not true. I stand with my country and in full support for my sister @PriyaDutt_INC. I urge everyone to come out in maximum numbers and cast their vote for our nation! ????????

Priya Dutt will be contesting against BJP's Poonam Mahajan, daughter of the late Pramod Mahajan.

Poonam Mahajan, who is also the head of the party's youth wing, had defeated Priya Dutt in the 2014 elections by a margin of 1.86 lakh votes. Ms Mahajan filed her nomination from the Mumbai Northwest constituency on Friday.

Many have termed the upcoming battle in the constituency as one of political legacies.

Mumbai Northwest is often referred to as the constituency of stars owing to the number of Bollywood celebrities residing there.