Mr Shah's candidature from Gandhinagar, which has traditionally been veteran leader LK Advani's seat, had triggered a political debate when the Bharatiya Janata Party announced its first list last week. 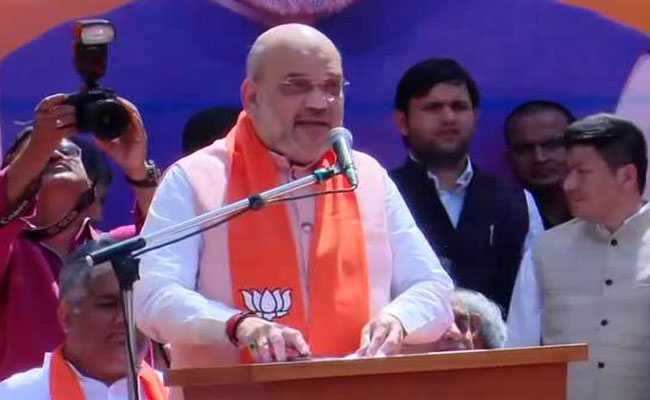 BJP National President Amit Shah will file nomination for the Lok Sabha polls today from Gujarat's Gandhinagar in the presence of Union Ministers Rajnath Singh and Nitin Gadkari. Shiv Sena Chief Uddhav Thackeray, apart from other allies, will also be in attendance.

Mr Shah's candidature from Gandhinagar, which has traditionally been veteran leader LK Advani's seat, had triggered a political debate when the Bharatiya Janata Party announced its first list last week. Mr Advani, who was the Deputy Prime Minister in the government led by Atal Bihari Vajpayee, was among the 10-odd leaders above the age of 75, who the party dropped this time.

With just two weeks to the Lok Sabha elections, poll fever has gripped the country. Prime Minister Narendra Modi will also address three rallies today- two in Assam and one in Arunachal Pradesh.

Here are the highlights on the Lok Sabha Elections 2019:

Mar 30, 2019 12:10 (IST)
Our Government Has Honoured Your Hopes: PM Modi In Arunachal Pradesh
Prime Minister Narendra Modi is addressing a rally in Arunachal Pradesh. Here are the highlights of his speech:
Mar 30, 2019 11:40 (IST)
"If Indira Gandhi can get credit for dividing Pakistan, why shouldn't PM Narendra Modi get credit for Balakot strike?" asks Rajnath Singh
Mar 30, 2019 11:19 (IST)
"Today is a big day... I stand here today before filing my nomination from Gandhinagar," says BJP Chief Amit Shah.
"I started here in 1982 as a booth-level worker... From distributing pamphlets, putting up posters, doing booth-level work, today I am fortunate that my party - the BJP - has made me the national president of the world's largest party. It has been a great journey for me," he said.
"If you take out BJP from my life, you will be left with zero/nothing (shunya)," he added.
"I am blessed that I am getting to contest from the very seat from which veteran leaders like Atal Bihari Vajpayee and LK Advani stood. This is an honour for me," Mr Shah said.
Mar 30, 2019 11:14 (IST)
"India has taken a big leap in the world stage, all thanks to our prime minister Narendra Modi. And people like Rahul Gandhi say 'Chowkidar Chor Hai'?": Union Minister Rajnath Singh
"I appeal you all to come together and convey a message to Rahul Gandhi that "Chowkidar chor nahi hai, chowkidar pure hai" (The watchman is not a thief, he is pure)": Rajnath Singh
Mar 30, 2019 11:09 (IST)
Amit Shah Will Live Up To Gandhinagar's Expectations: Rajnath Singh
"I have come here to congratulate Amit Shah on this significant move... He is going to contest from the seat where our veteran leader LK Advani used to contest. This is a big move, and I am sure Amit Shah will live up to the expectations of this constituency": Union Minister Rajnath Singh
Mar 30, 2019 10:58 (IST)
"Hindutva Is Our Breath": Uddhav Thackeray
"Hindutva is our breath. How will we live without Hindutva?" asks Uddhav Thackeray.
Mar 30, 2019 10:57 (IST)
"A Lot Of People Are Surprised That I Am Here," Says Uddhav Thackeray
Uddhav Thackeray, who is present at the rally, said: "A lot of people are suprised that I am here. Some people have stomach ache. We have a cure."
On ironing out the differences with ally BJP, he said: "When we sat together we have solved our issues, our disagreements."
Mar 30, 2019 10:54 (IST)
BJP Chief Amit Shah has made our party largest in the world,  Union Minister Nitin Gadkari said today.
Mar 30, 2019 10:28 (IST)
Amit Shah With Shiv Sena Chief Uddhav Thackeray 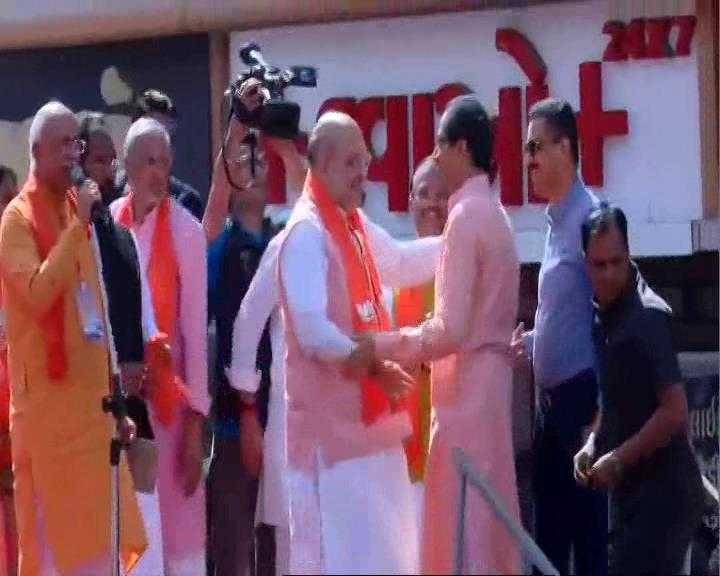 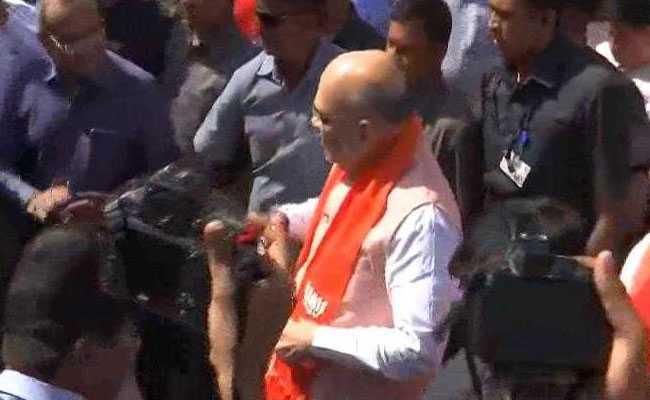 Mar 30, 2019 09:58 (IST)
"Leaving For Ahmedabad," Union Minister Rajnath Singh Tweets
Hours before Amit Shah files nomination from Gujarat's Gandhinagar, Rajnath Singh tweeted this morning that he was leaving for Ahmedabad for the event.

Mar 30, 2019 09:49 (IST)
Karnataka Congress chief Dinesh Gundu Rao Writes To Election Commission Over I-T Raids
Karnataka Congress chief Dinesh Gundu Rao has written to Election Commission of India, Central Board of Direct Taxes and President Kovind over Income Tax raids in Karnataka against the Congress, JD(S) candidates and leaders and their supporters, news agency ANI reported.
Mar 30, 2019 09:23 (IST)
BJP President will file address a public meeting in Ahmedabad's Naranpura at 9:40 am. This will be followed by a roadshow that begins at 10:40 am. He will file nomination at around 1:20 pm.
Mar 30, 2019 09:18 (IST)
Preparations Underway In Ahmedabad Hours Before Amit Shah Files Nomination 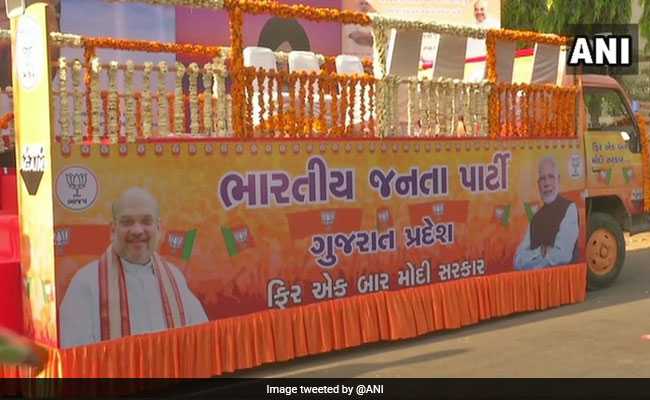 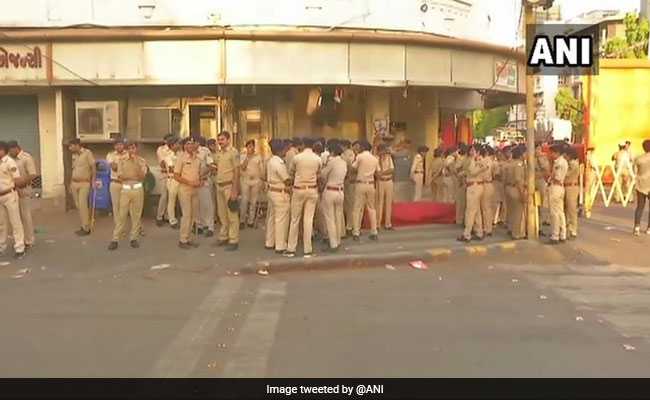 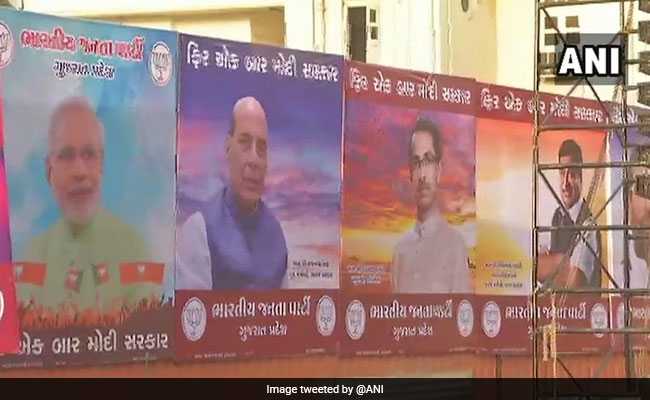