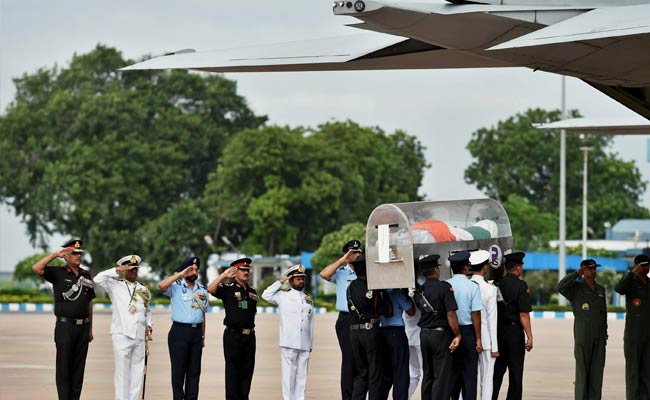 Dr Kalam's funeral will be held in Rameswaram at 11 am on Thursday. Prime Minister Narendra Modi will attend, said union minister M Venkaiah Naidu, who is among three ministers who accompanied Dr Kalam's body today from Delhi to Madurai in Tamil Nadu and then to Rameswaram.

Tamil Nadu Chief Minister J Jayalalithaa will not attend the funeral as she is not well, the state government said, but will send seven ministers.

Dr Kalam died on Monday after a massive cardiac arrest while delivering a lecture at the Indian Institute of Management, Shillong. He was 83.

Today, people in Rameswaram can pay their last respects to Dr Kalam at a ground near the bus terminus where his body has been taken now. Hundreds had visited 10 Rajaji Marg, Dr Kalam's Delhi residence, on Tuesday to pay tribute to the People's President.

Prime Minister Narendra Modi, too, had visited the Delhi bungalow where Dr Kalam lived for the last seven years.

Penning his tribute to the 'missile man' and who was felicitated with the highest civilian honour, the Bharat Ratna, PM Modi in his blog, said, "Bharat has lost a Ratna".

"Our scientist-President - and one who was genuinely loved and admired across the masses - never measured success by material possessions," he said.

"For him, the counterpoint to poverty was the wealth of knowledge, in both its scientific and spiritual manifestations," the Prime Minister said.

He remembered President Kalam as one who took little from the world, and gave all he could to the society.

"Kalamji refused to be defeated by circumstances. His character, commitment and inspirational vision shine through his life. He was unencumbered by ego; flattery left him cold," PM Modi said.

Describing him as a "hero" of India's defence, the Prime Minister said his contributions to "our nuclear and space achievements have given India the muscle to be confident of her place in the region and the world."

PM Modi said his profound idealism was secure because it rested on a foundation of realism. President Kalam was "equally at ease before an audience of suave, globe-trotting ministers and a class of young students", the PM said.
Comments
President KalamAPJ Abdul KalamAbdul KalamKalam funeralRameswaramPM Modi Abdul KalamIIM Shillong