On Sunday, Katrina was busy celebrating her special day with Alia Bhatt (who won the Best Actress IIFA award for Udta Punjab) and Preity Zinta, who turned heads on the IIFA green carpet in a black ensemble 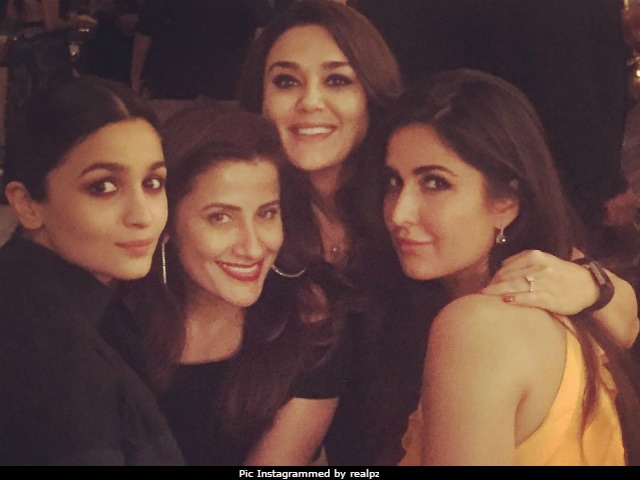 New Delhi: Katrina Kaif is secretly glad that the main IIFA award ceremony was a day ahead of her birthday. June 16 is when the actress blew out 34 candles on her birthday cake and had a blast in New York. On Sunday, Katrina was busy celebrating her special day with Alia Bhatt (who won the Best Actress IIFA award for Udta Punjab), Preity Zinta, who turned heads on the IIFA green carpet in a black ensemble, and celebrity fitness trainer Yasmin Karachiwala. Katrina, Alia and Preity who were part of the 18th Edition of the International Indian Film Academy (IIFA) awards in New Jersey, must have skipped the closing party, which was scheduled for Sunday in New York's La Marina Cafe. Instead, the stars were spotted having a little celebration of their own at the Sheraton New York Times Square Hotel. Instagram has evidence, courtesy Preity.

In the pictures, the birthday girl stood out in a ruffled marigold dress while Alia, Preity and Yasmin were colour-coordinated in black. "Happy Birthday, my darling Katrina Kaif. May this year bring you more happiness, success, sexiness and loads of love always! Stay beautiful," Preity wrote along with the photograph.

Happy Birthday my darling Katy@katrinakaif you are the reason i cut short a training to be with you on your special day..

Meanwhile, this is what Katrina posted on the morning of her special day. Can you tell which one Katrina is?

At the IIFA awards in New Jersey, this is how Katrina set the stage on fire. You might want to put on your kala chashma before taking a look at these.

Swooning the audience with her killer moves! @katrinakaif bedazzles on the #IIFA2017 stage.

Thank you #IIFA , NJ , NY and all the amazing people who came to the show for an amazing night . The lovely outfit by @ziadnakad