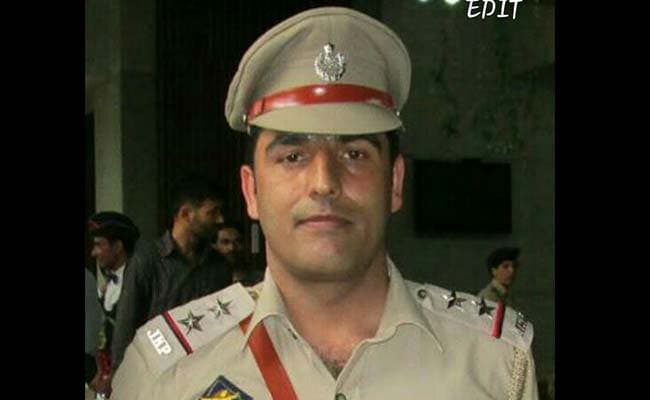 Altaf was the recipient of President's police medal for gallantry and several other bravery awards.

Srinagar: Considered among the best counterterrorism police officers in Jammu and Kashmir, sub inspector Altaf Ahmad was killed in an encounter in Bandipore district today, in a powerful blow to the state's security agencies.

His death has shocked the police and security agencies in Jammu and Kashmir. "I am unable talk on camera. I might break down," said director general of police K Rajindra Kumar.

Police say Altaf, along with two colleagues, was on a covert mission in Bandipore to track down Lashkar-e-Taiba commander Abu Qasim.

Qasim, a Pakistani terrorist, was the mastermind behind the terror attack on a Border Security Force convoy in Udhampur on August 5 according to the National Investigation Agency.

Before Altaf could reach the target, police say the terrorist hiding behind a passenger vehicle opened fire on him. He was critically injured and was immediately airlifted to an Army hospital where he was declared brought dead.

Altaf was considered a key operative in the security forces' counter insurgency grid and his death is seen as huge blow to anti-terrorist activities in Kashmir, experts said.

Altaf who joined the department as a constable rose from the ranks and was known as police's 'cyber boy' who made promising headways into bringing down terrorist networks, officers who knew him, said.

"I am shocked because Altaf was extraordinary in every field. His death is a huge loss to us" said Javid Gilani, inspector general of police.

Altaf came to prominence after he mastered the art of tracking militants through mobile phones. He captured several top terrorist commanders and helped security forces carry out a number of anti-terrorist operations in the last 10 years.

"He is behind the arrest of hundreds of militants and hundreds of encounters in Kashmir for last 10 years," said a senior officer.

Altaf was the recipient of President's police medal for gallantry and several other bravery awards. A resident of Kulgam in South Kashmir, Altaf is survived by his wife and two children.