An ancient temple in Bandipore came to life today when Kashmiri Muslims offered prayers on Shivratri.

BANDIPORE: An ancient Shiv temple in Bandipore's Sumbal town on the banks of Jhelum hasn't had devotees on Shivratri for years. Not after Kashmiri Pandits fled the town 25 km from Srinagar during the peak of the militancy in the early nineties.

Kashmiri Muslims living in the town turned up at the temple to celebrate Shivratri, the biggest festival on the calendar of Kashmiri Pandits. A local contractor Imtiaz Ahmad led the prayers after dozens of young men scrubbed the temple floor clean; pouring water on the Shivling, the representation of the Hindu deity Shiva. He also offered fruits and sweets.

It may be a small step.

But the message was big. And the hundreds of Muslims standing at the temple gate with placards - that asked the Pandits to come back home - made sure nobody missed it. 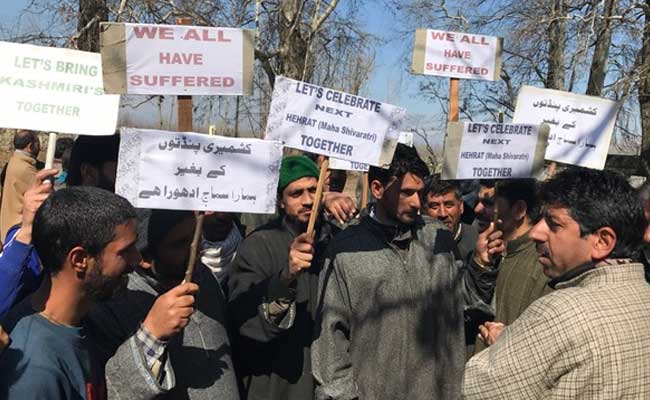 Outside the temple, people held a demonstration to seek the early return of Kashmiri Pandits.

Mr Ahmad said they did their best to keep the tradition alive, and intact. "That is why we entered the temple, cleaned it... (We did) whatever we could do since we are Muslims, not Pandits. In our humble way we performed puja here," he added. People also distributed walnuts, continuing with the tradition of the Pandits on Shivratri.

Promoted
Listen to the latest songs, only on JioSaavn.com
Another resident Manzoor Ahmad added: "They are part of our body and soul which has been snatched and separated from us. Today we are sending a message to them. Please return, we are with you."

This is the first time that the Muslims in a region had come together to make their message to the Pandits heard. A common refrain was that they had decided not to let any political party or ideology divide them.