"Your contributions are proof that women peacekeepers are vital to peace and security everywhere," the UN secretary general Antonio Guterres said. 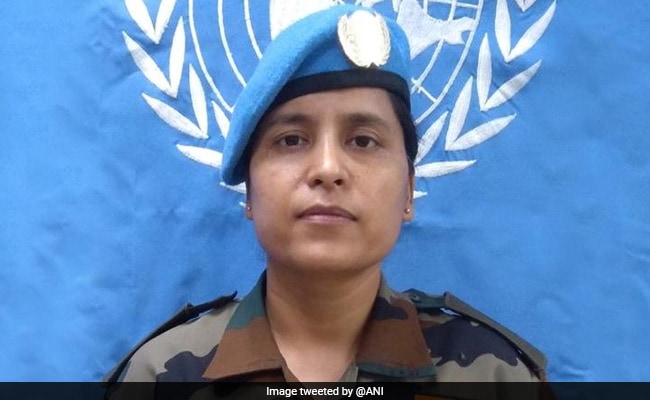 Suman Gawani has recently completed an assignment in South Sudan.

Mr Guterres bestowed the award to Ms Gawani and Ms Araujo in a virtual ceremony, commemorating the International Day of Peacekeepers.

This is the first year the prestigious award has gone to a peacekeeper from India. Military Observer Ms Gawani has recently completed an assignment in South Sudan. Ms Araujo is working in the United Nations' Multidimensional Integrated Stabilization Mission in the Central African Republic.

He said both Ms Gawani and Ms Araujo's "inspiring work has made a remarkable difference in promoting gender equality and empowering local women and your own colleagues."

"Your contributions are proof that women peacekeepers are vital to peace and security everywhere," the UN secretary general said.

Mr Guterres said during her deployment with the UN Mission in South Sudan, Ms Gawani mentored more than 230 Military Observers on conflict-related sexual violence and ensured the presence of women military observers in each of the mission's team sites.

She also trained the South Sudanese government forces and helped them launch their action plan on conflict-related sexual violence.

Mr Guterres also paid tribute to the military, police and civilian personnel who laid down their lives in the line of duty.

Major Ravi Inder Singh Sandhu and Sergeant Lal Manotra Tarsem, who served with the UN Mission in South Sudan (UNMISS); Sergeant Ramesh Singh with the UN Interim Force in Lebanon (UNIFIL); Private Johnsion Beck with the UN Disengagement Observer Force (UNDOF) and Edward Agapito Pinto, who served in a civilian capacity with the UN Organization Stabilization Mission in the Democratic Republic of the Congo (MONUSCO) posthumously received the medals in the virtual ceremony.

The year 2020 marks the 20th anniversary of Security Council Resolution 1325 on Women, Peace and Security. The theme for the International Day of UN Peacekeepers this year is "Women in Peacekeeping: A Key to Peace."

Mr Guterres, who has been a staunch advocate for increasing the participation of women in UN peacekeeping, said with each passing day women peacekeepers help improve all aspects of peace operations and performance - better access to local communities, prevent and reduce conflict, serve as role models for peers and others.

"In addition, we have seen that our operations are better able to build trust with those in need of protection when their staffing reflects the communities in which they serve. This is another reason why increasing the number of women in peacekeeping is so crucial," Mr Guterres said, adding that peacekeeping is more effective for everyone when "we have more women peacekeepers at all levels, including in decision-making."

"We will continue to do everything we can, including with our troop and police contributors, to reach this goal," he said.

India's Permanent Representative to the UN Ambassador TS Tirumurti, in his message on Peacekeepers Day, said Ms Gawani "epitomises, in many ways, the rich values of Indian peacekeepers."

Mr Tirumurti honoured India's brave men and women who have served as peacekeepers selflessly in foreign lands to preserve international peace and security.

"Indian peacekeepers have been at the forefront of this effort. They have been widely admired for their bravery, professionalism and selfless service. But India's long standing UN peacekeeping contribution has not come without cost. India has lost more peacekeepers than any other member state of the United Nations," he said, in a video message.

Over the last 70 years, more than 160 Indian military, police and civilian personnel have lost their lives while serving in the UN missions around the world.

"They are doing everything they can to be an integral part of the solution to this crisis while keeping themselves - and the communities they serve safe. But the virus is not the only threat that our peacekeepers face. Hostile acts, improvised explosive devices, accidents and diseases continue to take a heavy count," he said, as he paid tribute to the 83 military, police and civilian personnel from 39 countries who lost their lives last year serving in the UN peace operations.

India is the fifth largest contributor of uniformed personnel to UN Peacekeeping.

It currently contributes more than 5,400 military and police personnel to the UN peacekeeping operations in Abyei, Cyprus, the Democratic Republic of the Congo, Lebanon, the Middle East, Sudan, South Sudan and Western Sahara as well as one expert to the UN Assistance Mission in Somalia.