In UP, Shia, Sunni Muslims Stand Shoulder To Shoulder For Eid Prayers

Bakrid celebrations: While joint prayers on Eid were offered for the fourth year in a row, it was for the first time that women from both the sects prayedat the venue Shia and Sunni Muslims offered joint prayers led by a Sunni imam at the Shia Imambara in the morning.

Bakrid was celebrated with fervour and enthusiasm across the country today. The highlight of the celebrations in Uttar Pradesh, however, were the joint prayers offered by the Shia and Sunni sects in Lucknow. Shia and Sunni Muslims stood shoulder to shoulder and offered joint namaz led by a Sunni imam at the Shia Imambara in the morning.

While joint prayers on Eid were offered for the fourth year in a row, it was for the first time that women from both the sects prayed at the venue.

"It was different here. It was very good to meet people of all communities and it felt good to mingle with each other," said Anam, who offered prayers in the ladies section.

The split between Shia and Sunni Muslims can be traced back to a dispute between the prophet Muhammad's followers over who should assume spiritual leadership after his death. Other differences and rituals developed over time. 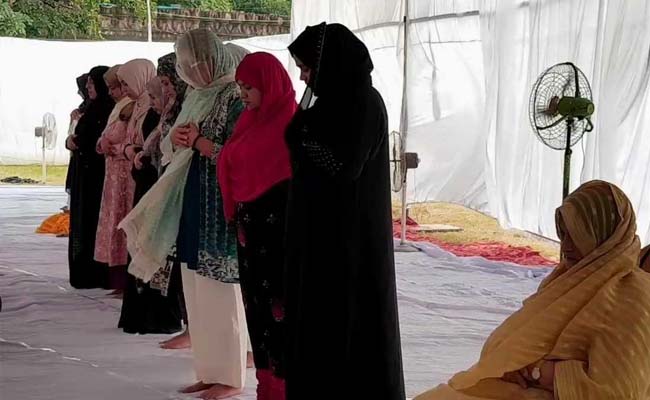 Special arrangements were made at the venue for the women of both the sects.

Apart from praying for peace and prosperity, devotees also prayed for those who lost their lives in Kerala floods. Funds were raised to help rebuild the flood-ravaged state. The money was directed to the Chief Minister's Disaster Relief Fund.

The Shoulder to Shoulder (S2S) Foundation, a citizen-driven platform that works for peace and communal harmony, was started in 2015 with an idea to encourage brotherhood within the fraternity and also include other religions in the peace process, said a founding member.

Dr Kauser Usman, one of the co-founders, told NDTV, "This isn't just a call to stand shoulder to shoulder, but the message is to bring hearts closer. This is a message of brotherhood and peace, not just for Shias and Sunnis, but for the whole country."

Atif Haneef, member, said that the joint prayer marks peaceful co-existence of both the sects. "We have been working to promote peace for the last four years. We want to spread the message all over the world," he said.