The minister has justified what he calls "development work" and said the controversy is "needless".

A group of people were seen spraying saffron paint on homes in Prayagraj.

A businessman in Uttar Pradesh's Prayagraj city has filed an FIR (first information report) against a group of people who allegedly painted his home saffron despite objections. He claimed that he was threatened and abused after he asked them to stop. The street where the incident took place also has one of the homes of UP Minister Nand Gopal Nandi. A second FIR filed by another resident claims the minister sent the men.

The minister has justified what he calls "development work" and said the controversy is "needless".

Visuals from the street showed rows of houses painted in saffron and religious symbols being painted on many of them.

A nearly one-minute long clip shot by businessman Ravi Gupta early Monday morning from the balcony of his home in Prayagraj's Bahadurganj locality - about 200 km from state capital Lucknow - shows a group of people spraying saffron paint on the outer walls of his home.

"See how much this 'goonda gardi' (hooliganism) has increased," a man can be heard saying.

Another person is heard urging: "Please stop when I am asking you to. Please move away."

But the men did not stop, Mr Gupta said, and they let loose a volley of abuses at the businessman and his family members. 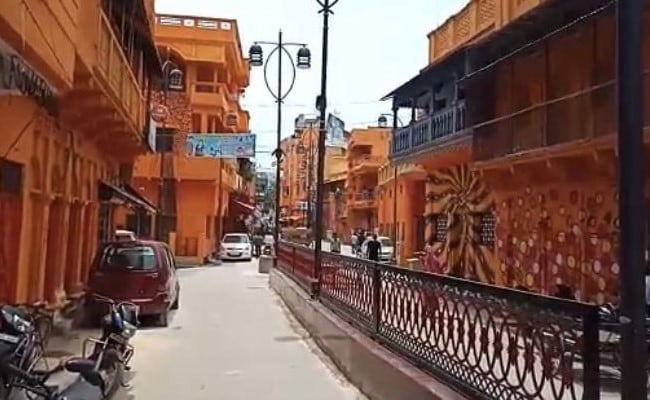 In the same clip, one more person is heard naming Mr Nandi and alleging the work is being done after he gave directions.

The group of men then directly spray on the people in the balcony, covering the phone lens in paint

Mr Gupta filed an FIR on Monday night naming a man - Kamal Kumar Kesarwani - as the main accused in the case. Mr Kesarwani is UP Minister Nand Gopal Nandi's cousin.

"All I want is that the constitutional safeguards to me as a citizen should not be tampered with. I should be allowed to live in peace. I am a trader... no one should trouble me. I only said that I do not want to get my house painted. But I was abused and my house was forcibly painted," said Ravi Gupta.

A second FIR filed by another resident is against unknown people; the complaint says that "the men who painted the streets were sent by UP minister Nand Gopal Nandi". The cases being investigated, the Prayagraj Police said, adding that action would be taken in the matter.

However, Mr Nandi, who lives in the same neighbourhood, has said the FIR is a "conspiracy".

"It is not entirely 'bhagwa' (saffron). I can spot red, green, and even a 'chocolaty' colour. Some people - it seems- do not like beautification. These people are 'Vikas-Virodhi' (against the development)," Mr Nandi said.

"And then there are people who think they will become 'netas' (politicians) if they raise their voice. It's not only in my street but a river of development is flowing through Prayagraj," Mr Nandi told reporters.