External Affairs Minister S Jaishankar arrived in Munich on Friday for the security conference during which he is expected to outline India's views on several issues of global concern. 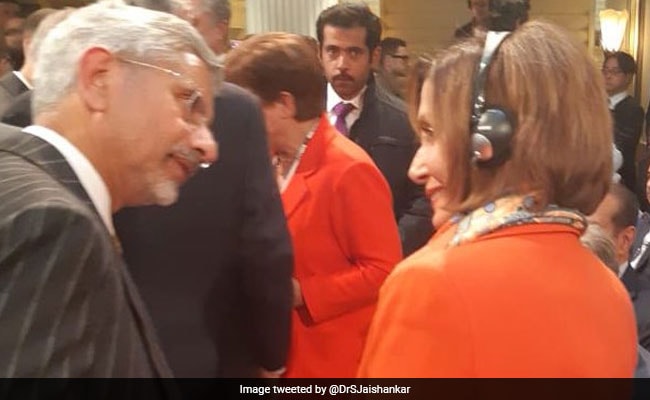 External Affairs Minister S Jaishankar today said that US House Speaker Nancy Pelosi's "consistent support" to India-US ties has always been a great source of strength as he met her on the sidelines of the Munich Security Conference.

Mr Jaishankar arrived in Munich on Friday for the prestigious security conference during which he is expected to outline India's views on several issues of global concern.

"Such a pleasure to catch up with Speaker Pelosi. Her consistent support to India-US ties has always been a great source of strength," Mr Jaishankar tweeted.

Mr Jaishankar on Friday met US ambassador to the United Nations Kelly Knight Craft on the sidelines of the conference.

The Munich Security Conference, being held from February 14-16, is the world's leading forum for debate on international security policy.

US President Donald Trump and First Lady Melania Trump will pay a state visit to India on February 24 and 25 at the invitation of Prime Minister Narendra Modi. In addition to New Delhi, Trump will also visit Ahmedabad to address a joint public meeting with Modi at a newly-built stadium.

Donald Trump on his maiden trip to India will meet the country's top business leaders in New Delhi on February 25, in a bid to push for deeper trade and business relations between the two nations.

On the sidelines of the security conference, Mr Jaishankar met several other world leaders attending the meet, including German President Frank-Walter Steinmeier and Foreign Minister of Armenia Zohrab Mnatsakanyan.

"Pleasure to meet President Dr Frank-Walter Steinmeier of Germany. Always thoughtful about the big issues of the day. Enjoyed his opening address to the Munich Security Conference," he tweeted.

"Very good meeting with FM @ZMnatsakanyan of Armenia. Our long-standing historical links are today expressed in growing political, economic and security cooperation. Confident that this close relationship will further deepen in the years ahead," Mr Jaishankar said.

Mr Jaishankar on Friday also met David Zalkaliani, the Minister of Foreign Affairs of Georgia and Defence Minister of Portugal Joao Cravinho. He also met his Lithuanian counterpart Linas Linkevicius and had "warm conversation" with him.